Fact Check: This logo of teachers has not got the nod of the Supreme Court, the viral claim is false

Supreme Court has not recognized the viral logo for teachers’ cars, the viral claim is fake. 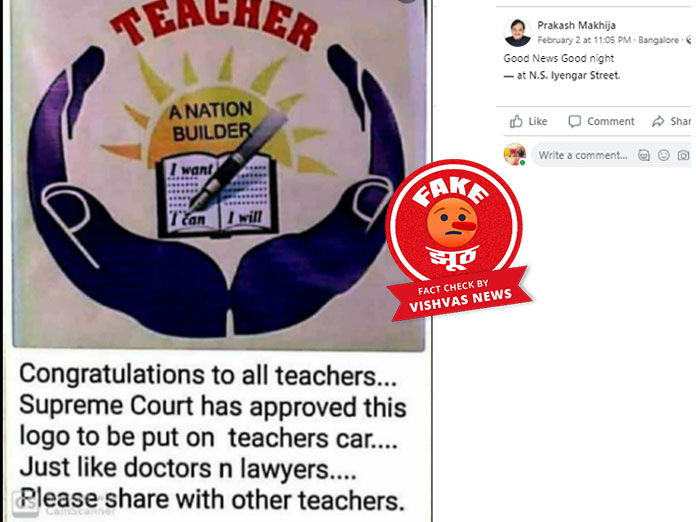 New Delhi (Vishvas Team). A post is going viral on social media in which a logo can be seen. In this logo, there is a book and a pen in the middle of the two palms. It is being claimed in this post that the Supreme Court has approved this logo. Vishvas News found in the investigation that the viral claim is fake. The Supreme Court has not recognized this logo dedicated to teachers.

This post viral on Facebook was shared by a user named G.K Viswanath. With this the caption is written in English “Congratulations to all teachers… Supreme Court has approved this logo to be put on your car…. Just like doctors n lawyers….”.

After this, we found a picture of some people presenting this logo on the website of Commerce Talent Search Examination Foundation, behind which it was written in Punjabi: Logo creator: Mr. Rajesh Khanna, Principal.

We investigated with keywords and found that this logo was designed by Rajesh Khanna, principal of Government Senior Secondary School, Kasabad, Ludhiana, Punjab in the year 2017.

We contacted Khanna regarding this. He told us that he had made this logo dedicated to the teachers. He said that I used to think that the way doctors, lawyers, CAs, etc. have their own logo and they put it proudly on their car, similarly teachers should also have a logo so that teachers can also get recognition. But it is wrong that it has got the recognition of the Supreme Court. Nothing like that yet. Hope that happens soon.”

This post on Facebook was shared by “G.K. Viswanath”. When we scanned the profile of this user, we found that the user is a resident of Chennai.

Conclusion: Supreme Court has not recognized the viral logo for teachers’ cars, the viral claim is fake.