Fact Check: This message going viral in the name of Toyota is fake

In the investigation of Vishvas News, the viral message turned out to be fake. It has nothing to do with Toyota. It can be dangerous for you to click on such unverified and clickbait links. 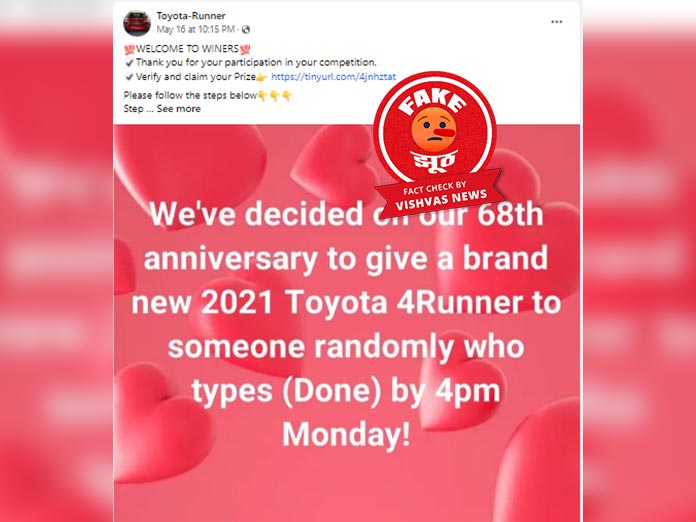 New Delhi (Vishvas Team). A message is going viral on WhatsApp and Facebook about the Toyota car company. It is being claimed that on the occasion of its 68th anniversary, Toyota is giving a free car. A link is also being shared with some posts. Vishvas News has also received this claim on its WhatsApp for a fact check. In the investigation of Vishvas News, this claim turned out to be fake.

A message is going viral on WhatsApp. A user has sent a similar message on our WhatsApp for fact check. The message reads, ‘We’ve decided on our 68th anniversary to give a brand new 2021 Toyota 4Runner to someone randomly who types (Done) by 4pm Saturday!’

Vishvas News first clicked on the link being shared in the post. We found that this link can be opened only on mobile and not on laptop or computer. The page that opened when clicked from the phone was not a link to the official Toyota site. We did not click on this link further due to security reasons.

We also searched the internet with the help of relevant keywords. We did not get any information about any such giveaway. When a reputed site like Toyota organizes such an event, it must be covered by authentic media outlets.

We contacted Toyota directly in this regard. We reached out to an executive named Abhijeet at Toyota Bharat customer care number and inquired about the same. He said, “There is no such giveaway by Toyota. Please do not click on any such link. We have also complained to Facebook in this matter.”

We contacted Ayush Bhardwaj, cyber security expert and former IT consultant of the Public Grievances Committee, Government of Rajasthan, for more information on this topic. He told us, “This message seems to be aimed at increasing engagement, as most of the posts don’t have any links. Posts containing links are clickbait links. This is called click-betting, in which the users are kept engaged on the website for a maximum time by luring them with lotteries, discount coupons, mobile phones, etc. By doing this, ads are shown to him. The ads are also shown on different pages of the website and in the name of the survey the user is taken to the different pages. It is based on “pay per view”. This means these cybercriminals get money “per view”. Ayush Bhardwaj advised the public not to click on such links. He said, “Sometimes such websites are created by cybercriminals from abroad. The basic purpose of creating such websites is to put malware in the users’ mobiles. Subsequent logging in be used to steal user-typed secret information such as NetBanking ID, login information of social media accounts, and passwords of email accounts. These key loggers send user details to a text file every few hours to cybercriminals.

The viral post was shared on the social media platform Facebook by a page named Toyota-Runner. There is no information on the page. This page has 2 posts from May 16th and no posts from earlier.

Conclusion: In the investigation of Vishvas News, the viral message turned out to be fake. It has nothing to do with Toyota. It can be dangerous for you to click on such unverified and clickbait links.