Fact Check: This old video is from a school in Uttar Pradesh, not Delhi, the Viral claim is misleading

Vishvas News checked the viral post and found that the viral video is from Ghaziabad city of Uttar Pradesh. The video is not from Delhi. 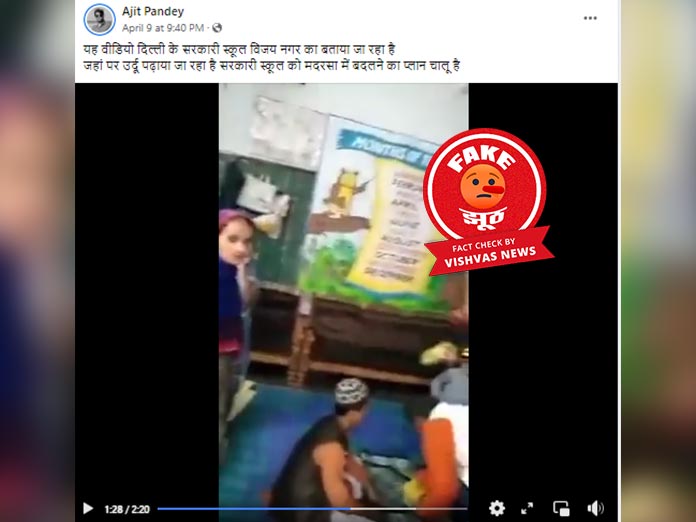 New Delhi (Vishvas News). A video is going viral on social media, in which some people from the Muslim community can be seen sitting in a school class and some religious activity is going on. On this, one person is raising the question that why such activity is happening in the school. The person making the video is also seen questioning the activities going on in the class. This person is seen saying that there is a conspiracy to promote Islamization in the classroom. By sharing this video, it is claimed that this video is from a school in Vijay Nagar, Delhi. Where Islamization is being promoted. A policeman can also be seen in the video. Vishvas News investigated the viral post and found that the viral video is from Ghaziabad city of Uttar Pradesh. The video is not from Delhi.

Sharing the viral video, Facebook user Ajit Pandey wrote, “This video is from Delhi’s Government School Vijay Nagar. The plan is on to convert the government school into a madrasa where Urdu is being taught.”

To start our investigation, we searched using keywords. We got a longer version of the viral video on a Facebook page named Dr Ashutosh Gupta BJP. According to the information given in the post, the viral video is from Mirzapur, a primary school in Vijay Nagar, Ghaziabad.

For more details, we contacted Dainik Jagran’s Ghaziabad reporter Ashutosh. He told us that the viral claim is false. This incident happened on 19 November 2021. A man named Riyazuddin lived with his wife in a primary school in Vijay Nagar, Ghaziabad. He used to look after the school and do school chores like cleaning the school etc. During the school holiday, he organized an Islamic program called Quran Khani. This video is from the same incident.

Vijay Nagar Police Station SHO Yogendra Malik said that the police had reached there after the commotion. This whole matter has been seriously investigated by the police, but we did not see any criminal or religious conversion activity on the spot. Nor was non-vegetarian food prepared in the program.

At the end of the investigation, Vishwas News did a social scanning of the user Ajit Pandey, who made the fake post. We got to know that Ajit Pandey has 202 followers on Facebook, and he is from Mumbai.

Conclusion: Vishvas News checked the viral post and found that the viral video is from Ghaziabad city of Uttar Pradesh. The video is not from Delhi.