Fact Check: This picture of a two-headed snake is edited

Vishvas News found this claim to be false. The two-headed snake seen in the picture has been made with the help of digital tools. 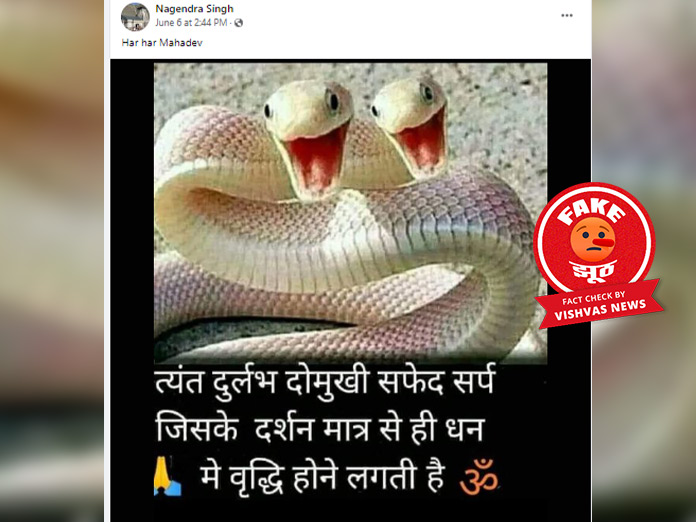 New Delhi (Vishvas News). A picture is going viral on social media, in which a snake with two heads can be seen. It is being claimed in the post that this is a real two-headed snake. Vishvas News in its investigation found that this claim is false. The snake seen in the picture has been made with the help of digital tools. It is not real.

To check this picture, we did a reverse image search of this image. We found this photo in a tweet on September 11, 2016 on the verified Twitter handle of Animal Planet India. But in this picture, the snake had only one head, not two. The caption with the picture read “Have you ever seen a snake smiling before?”

We found this picture of the snake on many websites including wallpaperflare.com and wallpapercrafter.com Here also, the snake had only one head, not two.

We shared this picture with editing and design expert Arun Kumar for confirmation. Arun analyzed the picture thoroughly and told us “This picture is edited. A closer look shows that both the faces are the same, just the face on the right side has been shortened a bit. If you look closely at the eye of the snake, you will find that both the faces are exactly the same. The photo is clearly edited.” The difference between the two snakes can be clearly seen in the collage below.

This picture was shared by a Facebook user named Nagendra Singh with the wrong claim. As per the profile, the user resides in Bijnor.

Conclusion: Vishvas News found this claim to be false. The two-headed snake seen in the picture has been made with the help of digital tools.