Fact Check: This Picture of The Girl Serving Langar Is Not From The Ongoing Farmers Protest 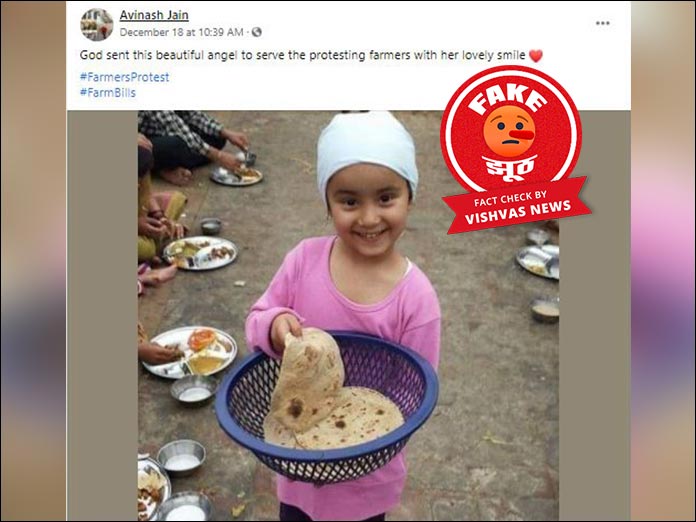 New Delhi (Vishvas News): A picture going viral on social media shows a girl serving langar. The claim alongside the post describes it to be from the ongoing farmers protest.

Vishvas News investigated and found the claim to be false. The picture going viral now is available on the internet since 2017. It has nothing to do with the ongoing farmers protest.

A Facebook user named Avinash Jain shared a post showing a girl serving langar. The claim alongside the post reads: “God sent this beautiful angel to serve the protesting farmers with her lovely smile. #FarmersProtest #FarmBills”.

To investigate the viral picture, we uploaded and searched the picture using Google reverse image tool. During the search, we found the picture on a page named Guru Ka Langar in a post dated July 14, 2017. The location of the picture was Paonta Sahib Gurdwara, as mentioned in the post. It is clear that the photo doing rounds has been present online since 2017.

We tried to contact the admin of the page but didn’t receive a response.

Vishvas News spoke to the correspondents of Dainik Jagran who are covering farmers’ protests at different places. Correspondent Sonu Rana, who is covering the protests at the Sindhu border and Bhagwan Jha reporting the protests on the Tikari border, confirmed that the picture going viral is not related to the farmer’s protest. Sonu Rana, a reporter covering the Sindhu border, said, “This photo is not of ongoing farmers protest. No food is being served in steel plates anywhere here. Food is served in disposable plates. The topography of viral photos is also completely different from here. ” Bhagwan Jha said: “This picture is not from here where I am reporting. There is no brick road anywhere here. “

We cannot independently tell the source of this picture, but it is clear that this picture is not from the ongoing farmers protest.
We scanned the page of the Facebook user Avinash Jain who shared the viral post. We found that the user is based out of Jaipur and is followed by 839 people.

Conclusion: Vishvas News investigated and found the claim to be false. The picture going viral now is available on the internet since 2017. It has nothing to do with the ongoing farmers protest.