Fact Check: This Video Is Not Of A Raid in Amrit Sukhdev Dhaba at Murthal, but Pappu canteen in Ludhiana 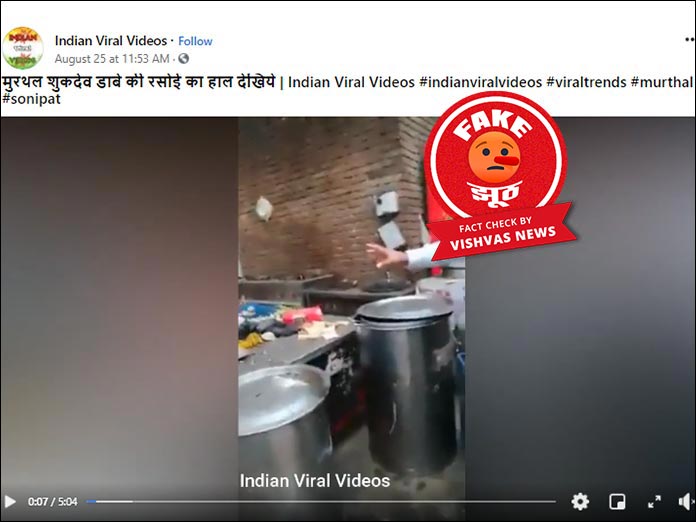 New Delhi (Vishvas News). A viral video on social media today features the kitchen in a restaurant. The post is claiming that this video is of Amrik Sukhdev, the famous dhaba located at Murthal in Sonipat. We found in our investigation that this video claiming about a raid in the kitchen of the restaurant is actually from a Dhaba in Luthiana, Punjab and not Amrik Sukhdev Dhaba of Sonipat.

See the archive link of the video here .

To investigate this video, we extracted the keyframes of this video with the help of InVID tool and searched them on Google reverse image with the keywords ‘Restaurant Kitchen Raid’. In the search, we found a video similar to the viral video.  A YouTube channel named press punjab uploaded this video on 12 May 2017. In the accompanying description it was written, “This was the situation of eatery pappu canteen at district court complex Ludhiana.”

The similarity in both videos can be seen in the collage below.

We also got a mention of this raid in Pappu canteen in a news of Times of India. This news describing the viral video stated that food was kept in the toilet. It also revealed that Pappu Canteen is a dhaba in Ludhiana, Punjab.

Vishvas News connected to Harbhajan, manager of Amrik Sukhdev Dhaba on call who clarified that the claim is false. “This video has been going viral for a long time with a false claim. We also released an official statement in 2018 and clarified that the video is fake and is not from our kitchen,” said the manager.

On searching, we found this statement uploaded on Amrik Sukhdev’s Facebook page in June 2018.

We scanned the profile of Indian Viral Videos, the Facebook page that shared this incorrect post. The page has 88 followers.

Conclusion: In our investigation, we found that this video claiming about the raid in Amrik Sukhdev Dhaba’s kitchen is false and is actually of a Dhaba in Luthiana, Punjab.