Fact Check: This Video of Emergency Landing of the Aircraft Is A Clip From GTA 5 Game; Viral Claim Is Fake

Vishvas News investigated and found that the video is not a real incident, but a clip of a GTA 5 video game. 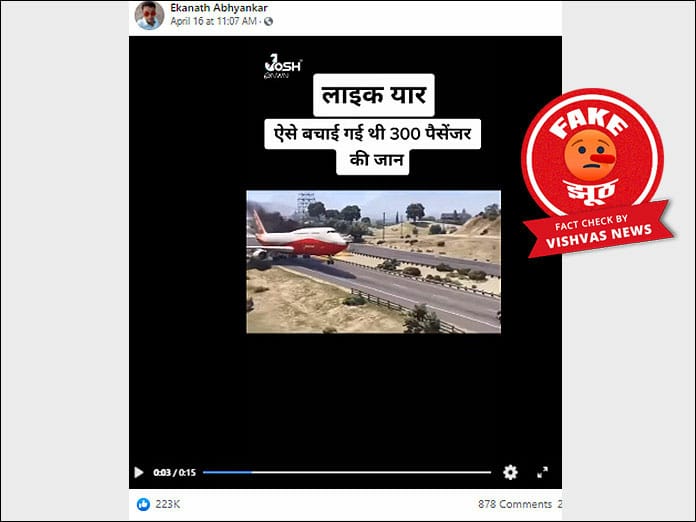 New Delhi (Vishvas News): A video is going viral on social media, in which the emergency landing of a large airplane can be seen. It is being claimed with the post that this video is of a real incident, in which 300 passengers were saved. Vishvas News found in its investigation that the viral video is not a real incident, but a clip of a GTA 5 video game.

A post doing rounds on social media shows emergency landing of a large airplane. In the video, the airplane is on fire and at the time of landing its front wheel is landed on top of a truck. The post reads, “Like this friends, this has saved 300 lives of passengers.”

The video looks like a scene of a film, as it is shot from different angles. Vishvas News first read the comments in the post to investigate the viral claim. In one of the comments, a user has described it as a GTA 5 game.

Based on this comment, we searched the keyframes of this video with the keywords GTA 5. We found a 4 minute 18 second video uploaded on September 24, 2020 on a YouTube channel called shah brothers. In the video, this viral clip can be seen after 3 minutes 45 seconds. The description with the video read, “GTA5 – Giant Air Plane” Emergency Landing “on Highway – Two Engines Failed – (This is GTA5 game)” This means that this clip is part of the GTA5 video game.

We also found this video on a YouTube channel called The UiGamer. According to this video uploaded on February 9, 2019, this clip is part of the GTA5 video game.

For more information on this subject, we contacted GTA5 video game maker Rockstar North via mail. The response we received stated, “This indeed is a clip from our game GTA 5.” This translates to “This is a clip of our video game GTA 5.”

Now it was the turn to scan the profile of the user Ekanath Abhyankar who shared this post on Facebook. After scanning the profile, we found that the user is from Karnataka.

Conclusion: Vishvas News investigated and found that the video is not a real incident, but a clip of a GTA 5 video game.