Fact Check: This video of ‘Masala King’ Dharmapal Gulati does not show his last moments, viral claim is misleading

The viral post is misleading. This one year old video of MDH owner Dharampal Gulati is now viral after his demise. 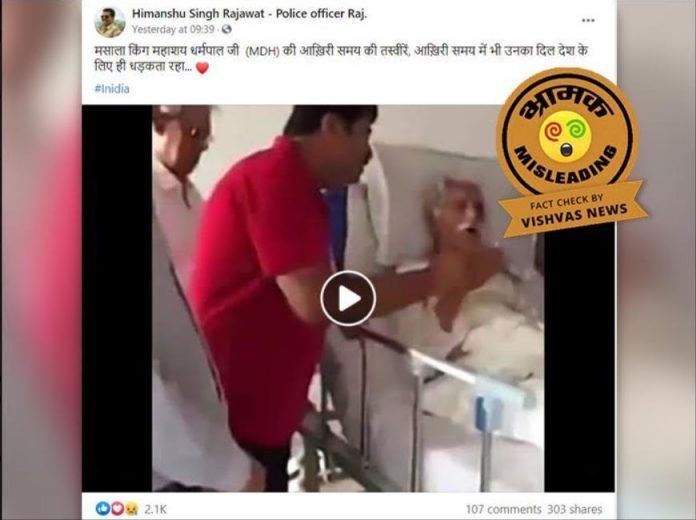 New Delhi (Vishvas Team). After the demise of Mahashay Dharampal Gulati, the owner of MDH spice brand, a video of a man singing to Gulati on his hospital bed is allegedly shared with a claim that it was captured during his last moments.

We observed the comments below this video shared on social media. We also found this video in a tweet by ABP News journalist Vikas Bhadoria. We also noticed that Twitter user Gagan Ahuja identified the person singing in video as his elder brother Rakesh Ahuja from Ambala in his comments. We found Gagan Ahuja’s Facebook post where in he has tagged Rakesh Ahuja in the viral video.

Vishvas News contacted Rakesh Ahuja to verify the claim. Clarifying to us that the video was not captured during the last moments of Dharampal Gulati, Ahuja told it was shot in September or October last year. “Gulati was admitted at his own Mata Chandan Devi Hospital in Janakpuri, Delhi.  We sang this song with the doctor’s permission there. Sir (Gulati) was very fond of music and whenever he listened to music, he used to swing happily. We were enjoying together,” said Ahuja.

Ahuja added that he is a distributor of MDH spices in Ambala and he often met Gulati. “When we came to know that he was sick in the hospital, we went to meet him,” he said.

Social scanning of the Facebook page that shared the viral video revealed that it has 45,036 followers.

Conclusion: The viral post is misleading. This one year old video of MDH owner Dharampal Gulati is now viral after his demise.