Fact Check: This video of naming ceremony of baby elephant is old and is from Karnataka, not Kerala

This claim turned out to be false in the investigation of Vishvas News. Viral video is 2020. This naming ceremony of the baby elephant took place at the Sri Manjunatha Swamy temple in Karnataka and not in Kerala. This elephant baby was named Shivani and not Vaikuntham. 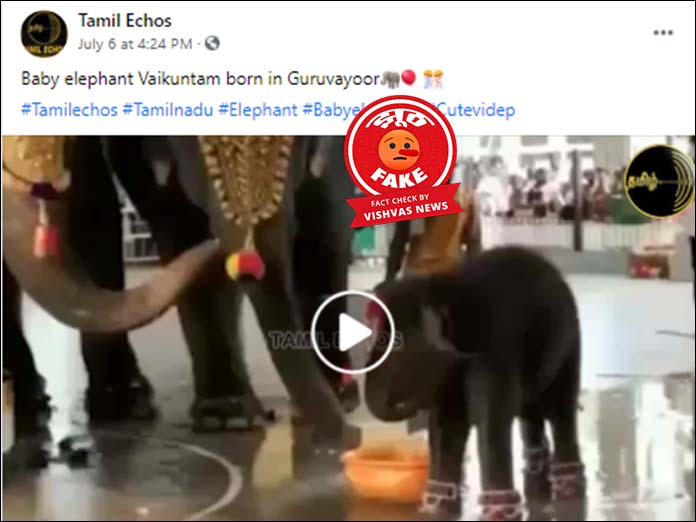 New Delhi (Vishvas Team). A video is going viral on social media, in which a baby elephant can be seen playing with water in a temple. It is being claimed with the video that this baby elephant was born in Guruvayoor, Kerala, and it has been named Vaikuntham. Vishvas News in its investigation found that this claim is false. This video is from Karnataka, not Kerala

The post claims that the video is from Guruvayoor. We searched and found Guruvayoor is in Kerala.

Taking the investigation further, we first extracted the screen grabs of this video with the help of InVID tool. Then we searched these screen grabs on Google reverse image with the keywords “Baby elephant playing with water at a temple”. We found a different version of this video uploaded on the YouTube channel of news agency ANI on August 31, 2020. Here the description accompanying the video read “Shivani, a baby elephant was seen enjoying with water after the naming ceremony at Sri Manjunatha Swamy Temple at Dharmasthala, Dakshina Kannada in Karnataka. The elephant calf was born on 1st July 2020. Officials told that the animal is healthy and likes to play with water.”

We also found news about it on www.hindustantimes.com. The story was published on 1 September 2020 in which this video was also uploaded. According to this news also the video is of Sri Manjunatha Swamy Temple in Karnataka. And the baby elephant’s name is Shivani.

We also found a video about the naming ceremony of this baby elephant on Tv9 Kannada’s verified YouTube channel on 31 August 2020 with the same description that the video is from Sri Manjunatha Swamy Temple in Karnataka.

For confirmation, we contacted Swaminatha Keshav, a priest at Sri Manjunatha Swamy Temple in Dakshina Kannada. He told us that the video is from August 2020 when the naming ceremony of this baby elephant took place in the temple. The calf was named Shivani.”

The Facebook page Tamil Echos, which shares the viral video, is followed by 2,290 people.

Conclusion: This claim turned out to be false in the investigation of Vishvas News. Viral video is 2020. This naming ceremony of the baby elephant took place at the Sri Manjunatha Swamy temple in Karnataka and not in Kerala. This elephant baby was named Shivani and not Vaikuntham.