Viral post related to Shahrukh Khan’s death proved to be fake in the investigation of Vishvas News. This rumour has been spread through unrelated pictures. 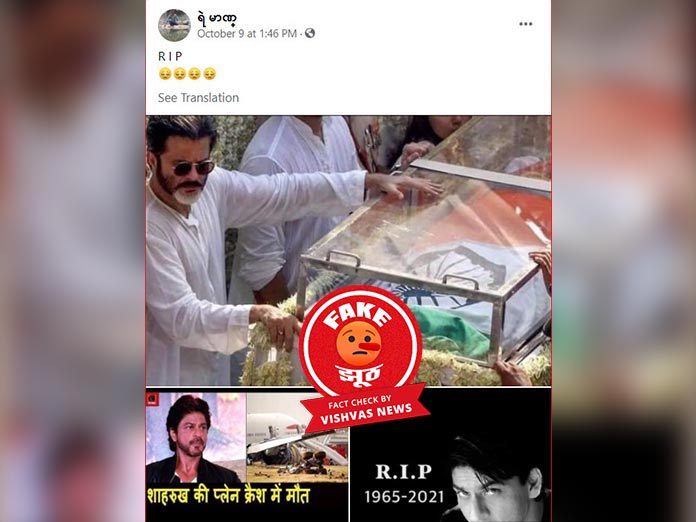 New Delhi (Vishvas News): A collage of three pictures is going viral on social media. It is being claimed that Shahrukh Khan, the King Khan of Bollywood, has died in a plane crash. The viral post turned out to be fake in the investigation of Vishvas News. The pics going viral are old.

Sharing three pictures, some Facebook users are claiming that Shahrukh Khan has died in a plane crash.

Vishvas News started searching for the truth behind the images. We searched the first picture of Anil Kapoor and found the image on many news websites using the Google reverse image tool. This photo was used in a news published on the website of Hindustan Times on March 1, 2018. The report stated that Anil Kapoor was standing near the dead body of Sridevi in her funeral in ​​Mumbai. This picture was released by PTI. Read full news here.

We then searched for the second picture. In this picture, a plane can be seen in a crashed state. Through Google reverse image search, we found the original image on a website called Aviation Accident in a report dated January 17, 2008. It was BRITISH AIRWAYS – BOEING – B777-236ER (G-YMMM) flight BA38. For more information about this, click here.

Vishvas News got in touch with Smita Srivastava covering Entertainment of Dainik Jagran in Mumbai. She said that the viral post is fake.

Vishvas News scanned to profile of the user who shared the viral post and found that the user is based out of Yangon. He is followed by 54 people.

Conclusion: Viral post related to Shahrukh Khan’s death proved to be fake in the investigation of Vishvas News. This rumour has been spread through unrelated pictures.