The post claiming that the protests shown in the video happened in Surat is misleading. This incident actually happened in Kathua. 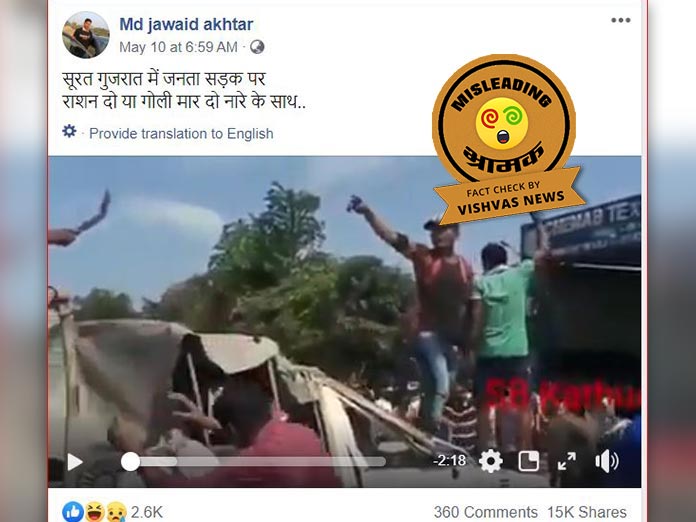 New Delhi (Vishvas News) Amid Coronavirus pandemic, a video is going viral in which some workers can be seen protesting on the streets. The video is viral with a false claim that the protestors are the residents of Surat, Gujarat who are protesting due to the unavailability of food due to lockdown. Vishvas News investigated and found that the viral post is misleading. The video is actually from Kathua, Jammu and Kashmir. Surat also witnessed a protest of workers a couple of days back but the viral video is not related to Surat.

A video is getting viral on Facebook claiming that the protestors in the video are from Surat, Gujarat. The post reads in Hindi: (English translation)
“In Surat, Gujarat, people have come out on the streets saying either give us food or shoot us.” The archived version of the post can be checked here.

During our investigation, we noticed a board named ‘CHENAB Textiles’.

We also found the video on Youtube Channel of India Today. We could related that same incident was captured but the video was shot from a different angle.

We also found a video on the Youtube channel of NMF News. We saw the same jeep and CHENAB Textiles board in the video as shown in the viral post. This shows that the viral video is from Kathua and not from Surat, as claimed.

Vishvas News spoke to Kathua’s SSP Mr. Shailendra Kumar Mishra. He said: “The viral video is not from Surat. The incident actually happened in Kathua. The workers of CHENAB textiles protested because they were paid 15 days wages instead of 1 month.”

We scanned the Facebook page who shared the viral video. The page is followed by more than 4000 people. The page has been created on January 26, 2020.

Conclusion: The post claiming that the protests shown in the video happened in Surat is misleading. This incident actually happened in Kathua.