Fact Check: Video of 2011 Japan Tsunami Passed off as Floods in Pakistan in 2020

The video showing cars being washed away by floodwaters is from a tsunami that hit Japan in 2011. It isn’t a flood in Pakistan in 2020. The viral claim is fake. 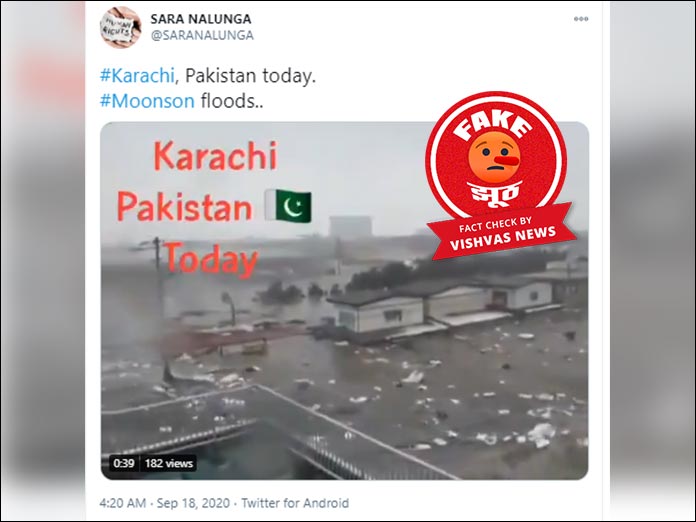 New Delhi (Vishvas News): A video going viral on social media shows cars being washed away by floodwaters. As per the claim superimposed on the footage shared on September 18, 2020, the video shows adverse weather in Karachi, Pakistan. When Vishvas News investigated, we found the claim to be false. The actual video shows a tsunami that hit Japan in 2011.

The video shared on Twitter on September 18, 2020, shows cars being washed away by floodwaters. The text superimposed on the video reads: “Karachi Pakistan today.”

Vishvas News noticed a user’s comment on the Twitter video stating that the footage shows a Tsunami in Japan.

We investigated using the InVid tool to extract the keyframes of the viral video. While performing Google Reverse Image Search of the keyframes, we found a video on Youtube titled ‘2011 Japan Tsunami: Ishinomaki.’

As per the description, the video was recorded from the rooftop of the office of Ishinomaki Gas (in Ishinomaki City, Miyagi Prefecture). The original video can be seen here.

You can see the comparison of the screenshots of the original video and the viral video:

Using Google Maps, we found the location where the video was filmed.

Vishvas News spoke to Adeel Jafry, Senior Assignment Editor, DawnNews, Pakistan. He said: “The video is not from Pakistan.”

This confirmed that the video is shared with the false claim that its location is Pakistan.

The post is shared on Twitter by a user named SARA NALUNGA. When we scanned the profile of the user, we found that the user has 1899 followers till this fact checked article was published. His profile was created in February 2013.

Conclusion: The video showing cars being washed away by floodwaters is from a tsunami that hit Japan in 2011. It isn’t a flood in Pakistan in 2020. The viral claim is fake.