The viral claim turned out to be false in the investigation of Vishvas News. The viral video has been created by a UK-based designer using editing software. 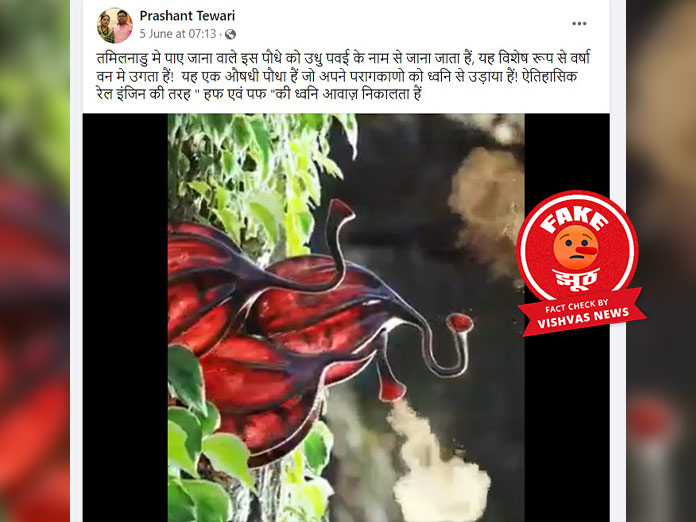 Vishvas News (New Delhi): A video of a pollen-blowing plant went viral on social media. It is being claimed that the name of this plant is ‘Oodhu Paavai’ found in Tamil Nadu. This medicinal plant only grows in dense rainforests, blowing its pollen with a sound. The viral claim turned out to be false in the investigation of Vishvas News. The viral video has been created by a UK-based graphic designer using editing software.

It is being claimed with the viral video (archive), ” translated: friends…This medicinal #plant,found only in dark rainy forests, is called Oodhu Paavai in Tamil. It blows out pollen grains periodically through its funnel-like structure. Also makes a sound like a train engine.”

To find out the truth of the viral claim, we extracted several keyframes of the video using the InVid tool and searched them through Google Reverse Image Search. We found the same video uploaded on 17 September, 2021 on a Twitter account named Luke Penry. After scanning this Twitter account we found that Luke Penry is a 3D artist who creates these types of digital sound art videos.

We found the viral video uploaded on the website Foundation.app, which conducts online auctions of digital art work. According to the information given in the description, this is an animation artwork, created by designer Luke Penry.

Taking the investigation further, we started searching on google through related keywords. We found a tweet related to the viral claim on the official Twitter account of designer Luke Penry. It was posted on 29 September 2021.

The tweet read, “The gift that keeps on giving . So many views! This is my CGI art that’s been mistaken for real.” Luke Penry shared this video on his Instagram on 28 September 2021, describing it as an art work.

For more information, we contacted a Botany Specialist and Retired Professor, Delhi University. We shared the viral claim with him. He told us that the viral claim is false. No such plant has been found yet.

This post was shared by a user named Prashant Tewari. According to the profile he lives in Lucknow, Uttar Pradesh.

Conclusion: The viral claim turned out to be false in the investigation of Vishvas News. The viral video has been created by a UK-based designer using editing software.