Fact Check: Video of Jain temple in Gujarat viral in the name of Ayodhya’s Ram temple

Vishvas News investigated and found the viral post to be fake. The viral video is of Chuli Jain Temple in Gujarat and not from Ayodhya. 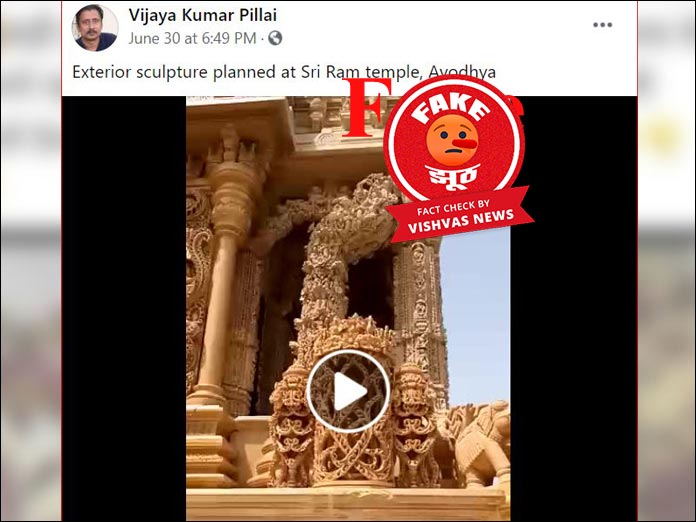 New Delhi (Vishvas News): A video of a temple is going viral on social media claiming that it is the Ram temple of Ayodhya. Vishvas News investigated and found the viral post to be fake. In fact, the viral video is of Chuli Jain Temple in Gujarat and not from Ayodhya.

Facebook user Vijaya Kumar Pillai uploaded a video on June 30. As per the claim, the video is related to Shri Ram temple in Ayodhya. The claim read: ‘Exterior sculpture planned at Sri Ram temple, Ayodhya.’

Vishvas News first carefully looked at the video going viral by the name of Ayodhya’s Ram Mandir. After seeing the video, we got the idea that the claim made with it is fake. We used the InVID tool and performed a Google reverse image search of the screengrabs. We found the original video uploaded on YouTube on June 25. Here, the viral video was stated as the Chuli Jain Temple.

We further searched for more videos related to Chuli Jain Temple on YouTube. We found many such videos whose architecture was similar to the viral video. You can see this below.

Vishvas News contacted the senior journalist Prashant Nema from Gujarat to know more about the viral video. He told us that the viral video is of the famous Chuli Jain Temple.

Now we had to know regarding the construction work in the Ram temple in Ayodhya. We found a tweet dated May 31, 2021, on the Twitter handle of Shri Ram Janmabhoomi Teerth Kshetra. In this, the information about the foundation was given in the form of four pictures. This revealed that the work is going on there right now.

We scanned the profile of the Facebook user Vijaya Kumar Pillai who shared the viral post. We found that the user is based out of South India and the page is liked by more than 800 people.

Conclusion: Vishvas News investigated and found the viral post to be fake. The viral video is of Chuli Jain Temple in Gujarat and not from Ayodhya.