Fact Check: Video of Lions From South Africa Going Viral In The Name of Gujarat 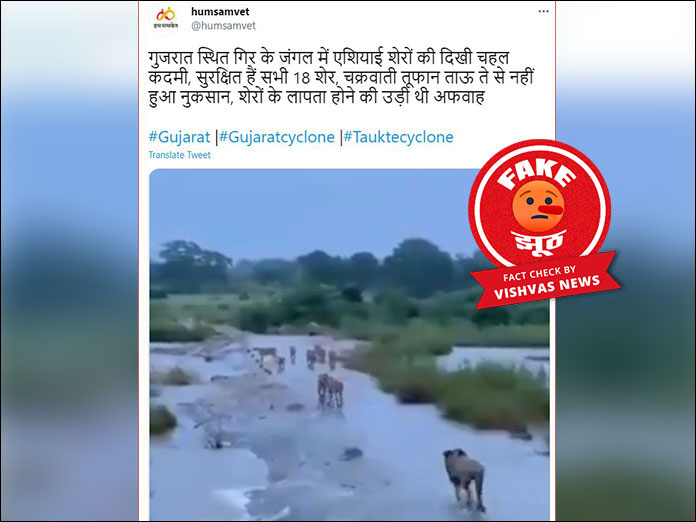 Vishvas News (New Delhi): A video showing some lions is going viral on social media. As per the claim, the video is from Gujarat. It is further claimed that this is a video related to the cyclonic storm in the forests of Gir.

Vishvas News investigated the viral posts and found that the video of the Mala Mala Game Reserve of South Africa is being made viral with the claim that it is from Gujarat. The post going viral is fake.

The Twitter handle ‘Humsamveet’ uploaded a video on May 21, writing: ‘Asiatic lions sighted in Gujarat’s Gir forest, all 18 lions are safe, no damage due to cyclonic storm Tauktae, the disappearance of lions was a rumor!

Vishvas News first approached Shatrughan Sharma, senior correspondent of Dainik Jagran in Gujarat, to investigate the viral post. He said that the claim going viral is fake. The entire mishap was caused by a tweet by Rajiv Kumar Gupta, Additional Principal Secretary, Forest and Environment Department of Gujarat, in which he shared a video of the lions as Gir.

However, the tweet was later deleted and the new tweet was done which stated that a wrong video was posted along with statement of Lion safety in Gir landscape. You can see it here.

During the investigation, the original video was found to be from the Mala Mala Game Reserve in South Africa. It was posted on Instagram on February 13.

In the end, we scanned the profile of the Twitter user named Humsamvet who shared the viral post. We found that his account was created in March 2020. He has 509 followers.

Conclusion: Vishvas News investigated the viral posts and found that the video of the Mala Mala Game Reserve of South Africa is being made viral with the claim that it is from Gujarat. The post going viral is fake.