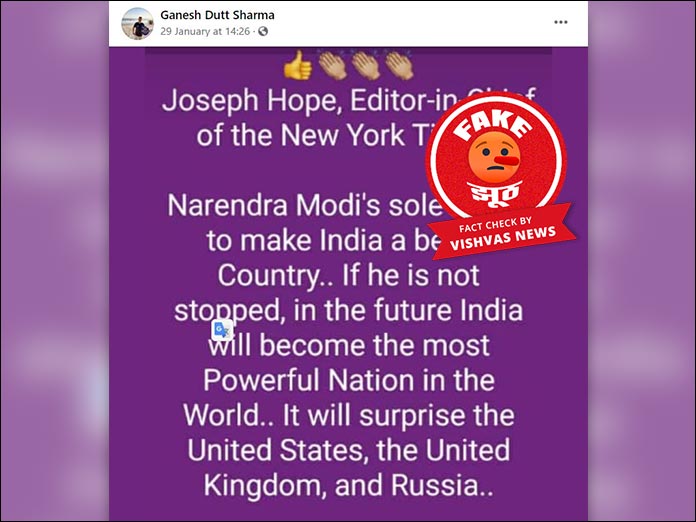 New Delhi (Vishvas News): An article on Prime Minister Narendra Modi is going viral on social media. It is being claimed that this article has been purportedly written by Joseph Hope, who is being referred to as Editor-in-Chief of The New York Times. As per the claim, in this article, Hope has expressed his views on Modi, praising him as one of the best leaders, and also wrote that his patriotism and leadership skills are a big threat to the Superpower Nations.

Vishvas News investigated and found that neither did The New York Times publish the viral article, nor the name of their Editor-in-Chief is Joseph Hope.

Facebook user Ganesh Dutt Sharma has shared a post that reads: “Joseph Hope, Editor-in-Chief of the New York Times: Narendra Modi’s sole aim is to make India a better Country.. If he is not stopped, in the future… India will become the most Powerful Nation in the World.. It will surprise even the USA, the United Kingdom, and Russia..Japan. Narendra Modi is moving towards a specific goal.. No one knows what he wants to do.”

We started searching about Joseph Hope on the Internet. We did find a reporter of this name in Asia Times, but we did not find any such article in his name as well.

Vishvas News contacted The New York Times spokesperson Ari Isaacman Bevacqua via email for more information. She wrote in response to the email that the editor of The New York Times is Dean Beckett and has not written any such article. She also stated that they have a staff of 1700 journalists and that they do not have any journalist named Joseph Hope.

We scanned the profile of the user named Ganesh Dutt Sharma who shared the post on Facebook. We found that the user is based out of Ambala Cantt.

Conclusion: Vishvas News investigated and found that neither did The New York Times publish the viral article, nor the name of their Editor-in-Chief is Joseph Hope.