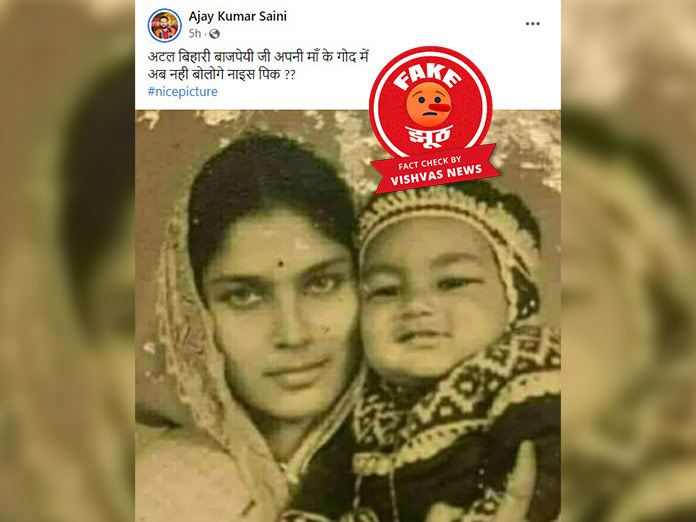 New Delhi (Vishvas News): The 98th birth anniversary of former prime minister Atal Bihari Vajpayee was observed on December 25. Eminent personalities of political fraternity and common people paid their tributes to one of the most influential and celebrated leaders of Indian politics. After this, a black and white photo of a child and a woman went viral on social media with claims that the photo is of Atal Bihari Vajpayee and his mother.

Vishvas News investigated the claim and found that the viral picture is not of former Prime Minister Atal Bihari Vajpayee but of social worker Ranu Shankar and her mother, who lives in Muzaffarpur, Bihar.

To investigate the viral image linked to Atal Bihari Vajpayee, we first searched it on Google reverse image and found that a news article was published in Navbharat Times on January 5, 2021. The report mentioned that the viral picture is connected to Bihar. The report further stated that this is a childhood picture of Muzaffarpur resident Ranu Neelam Shankar, while the lady in the image is Neelam Shankar. As per the report, Ranu Shankar said that this picture is from his childhood and his mother Neelam Shankar is with him in the picture. He said that his mother passed away in 1980 and he has kept this photo in her memory.

After this, we searched the Facebook profile of Ranu Shankar and found the viral photo. He posted the image on February 13, 2022, with the caption, (#हमारीपूज्यनीयमाताज़ीस्वर्गीयनीलमशंकर)
Translation: Our Revered Mother Late Neelam Shankar.

We spoke to Ranu Shankar for more confirmation. He said that this photo is from his childhood and he is with his mother in the picture. The photo was taken in a studio when he was about two years old. He also contested from the Paru assembly seat in 2020 and is the national president of Gandhi Swaraj Ashram. Presently, he is engaged in social service. He has also been awarded the Bihar Gaurav Samman.

We scanned the Facebook page ‘Ajay Kumar Saini‘ that shared the wrong photo. About 12,000 users follow this page created on 15 April 2020. This page is inspired by a political party.