Vishvas News in its investigation found that the viral images of Amruta Fadnavis, wife of Maharashtra deputy CM Devendra Fadnavis are morphed. She did not click pictures on the flooded streets of Pune and bring to fore the problems of Punekars. 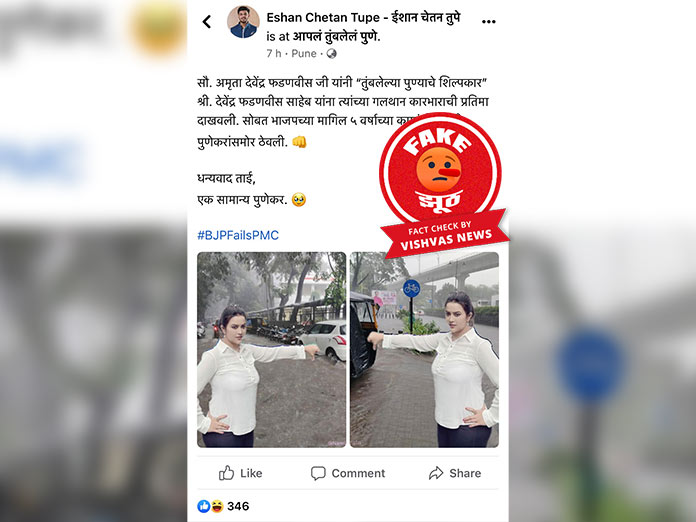 New Delhi (Vishvas News): Vishvas News came across a post going viral in the name of the wife of the deputy CM of Maharashtra, Amruta Fadnavis. It was claimed in the post that Amruta Fadnavis was standing on the flooded streets of Pune, showing a thumbs down. This was done to show her husband the sorry state of Pune after the floods and make him realise what BJP has done to Pune. Vishvas News in its investigation found the image to be edited.

Translation: Mrs Amruta Devendra Fadnavis showed the sorry state of affairs to the ‘architect of flooded Pune city’ Mr Devendra Fadnavis. She brought to the fore work done by BJP in last 5 years in Pune.
Thank you Amruta.
A common Punekar

Vishvas News started its investigation by checking the picture carefully. It clearly looked edited with the edges of Amruta Fadnavis’ picture shining.

We ran a Google reverse image search on the viral image.

We also found these pictures on the website of PI News. The news said: Returning rains have literally blown away grain across the state. Even in Pune, the return of rain has left the people of Pune reeling. Till now it was seen that the roads of Mumbai were submerged in water due to rain, but now in just one and a half hours of rain, the road of Pune has turned into a pond.

Then we ran a reverse image search on the picture of deputy Maharashtra CM’s wife, Amruta Fadnavis.

We found Amruta Fadnavis’ original picture on her Twitter profile posted on 16th July, 2021. She had posted a picture as a campaign against Mumbai potholes and flooded streets.

We also found a news report about the same on a Marathi website, ABP Maza.

In the next step of investigation we spoke to BJP spokesperson Shivrai Kulkarni, he said that the viral images are morphed. Wife of Maharashtra deputy CM, Devendra Fadnavis had clicked pictures on the water-logged streets of Mumbai. “These pictures have been edited and shared as that of Pune. The user who posted these pictures belongs to NCP and this is his attempt to defame not just BJP, but also Fadnavis couple. I condemn such acts of spreading false information,” Shivrai Kulkarni said.

In the last step of investigation we conducted a background check of the Facebook user, Eshan Chetan Tupe who posted the edited pictures. He is an NCP politician and is followed by 9,439 people on Facebook.

Conclusion: Vishvas News in its investigation found that the viral images of Amruta Fadnavis, wife of Maharashtra deputy CM Devendra Fadnavis are morphed. She did not click pictures on the flooded streets of Pune and bring to fore the problems of Punekars.