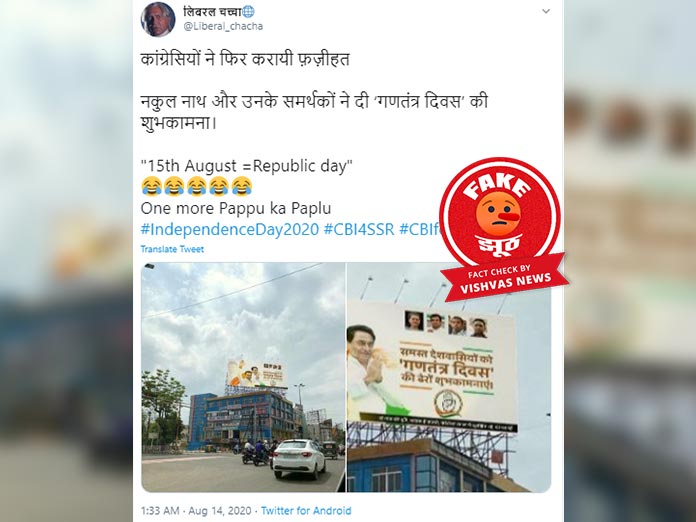 New Delhi (Vishvas News): A photo of a billboard is going viral on social media showing an alleged ad with photos of Kamal Nath and Nakul Nath wishing Republic Day. Vishvas News investigated and found that the image is edited. There was in fact, a different ad on the billboard.

A post shared on Twitter by a user named Liberal Chacha shows two photos of a billboard of Kamal Nath and Nakul Nath. The post written in Hindi roughly translates to: “Congress party supporters goofed up. Nakul Nath and his supporters extended Republic Day greetings.” The archived version of the post can be checked here.

We observed the image carefully by using the magnifier tool we found some hints that helped us identify the exact location of the billboard.

We noticed different commercial setups on the building. We saw the name of Amit Shukla Classes coaching center and found the building’s name. It is KK Plaza in MP Nagar, Bhopal, Madhya Pradesh.

We contacted the local from the area whose office is in the building. He shared the actual pictures of the billboard with us. There was no such poster as stated in the viral image.

Instead, there was an advertisement of Bandhan Bank. We also contacted the advertising agency which owns the billboard, RK Publicity. Mr Tariq, MD of RK Publicity clarified that the image is fake and is edited. There was no such poster on the billboard as mentioned in the viral post.

We compared the viral edited image with the original image. We observed that in the edited image one cannot see the billboard frame at the edge of the poster.

The poster is shared on Twitter by a user named Liberal Chacha. When we scanned the profile of the user we found that the user profile was created in June 2020.

Conclusion: A photo of a billboard which shows an alleged ad with photos of Kamal Nath and Nakul Nath wishing Republic Day is digitally edited.