The viral picture of Arpita Mukherjee trending on social media is not from TMC’s event in 2022 but from a blood donation camp organised in Kolkata in 2020. Hence, the claim is proven to be misleading. 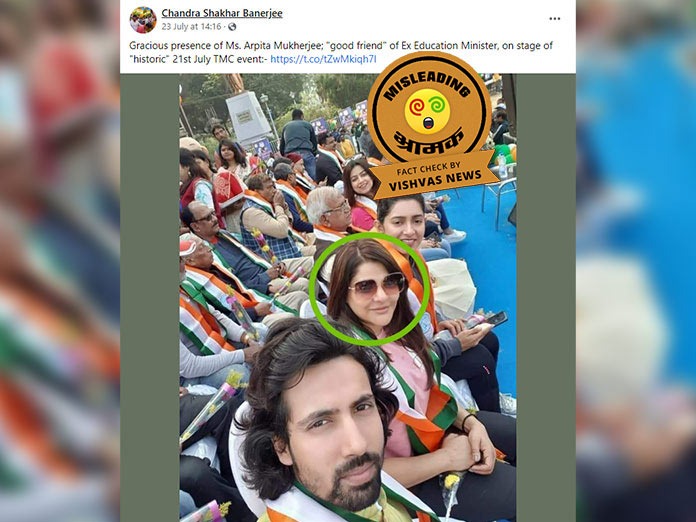 However, Vishvas News investigated and found this claim to be misleading. This is a two-year-old picture from 2020 when Arpita attended a non-political blood donation camp event in Kolkata.

Notably, as per a news report, Arpita Mukherjee has been arrested by the Enforcement Directorate after unaccounted cash worth about Rs 21 crore was seized from her residence.

Vishvas News searched the keyframes of the picture on Google reverse image to know the truth. We found similar posts being shared by many on Facebook and Twitter.

Leader of Opposition Suvendu Adhikari also uploaded a photo on social media on July 23 of Arpita Mukherjee and claimed that she was present at the Martyrs’ Day programme of Trinamool Congress (TMC) at Dharmatala.

Suvedha Adhikari is followed by nearly 176.6K Followers and his post was retweeted by more than 425 followers.

A post refuting Suvedha’s claims was found on Twitter, which stated, “FAKE NEWS ALERT: Suvendu Adhikari has claimed that the picture is from the 21st July Shahid Dibas event. Truth: The pictures are from a Blood Donation Camp organised by Kalighat Sports Club Association at Khudiram Anushilan Kendra on 23rd January, 2020.”

Further delving into the investigation, we found the same picture tweeted by Debangshu Bhattacharya Dev, State spokesperson of All India Trinamool Congress and General Secretary of Trinamool Youth Congress, on July 24, 2022 where he clarified, “The photograph of Arpita Mukherjee which the load shedding opposition leader is circulating claiming it to be clicked on July 21 meeting is false. The photograph was taken at a non-political blood donation camp.”

On being contacted via Gmail, Debangshu replied, “Yes. The picture they’re sharing as the meeting of our 21st July martyr’s day rally, is actually from a blood donation camp organised by a local club of the Kalighat area in the year 2020. I’ve shared a front view image of the same program on my Twitter handle, which clarifies everything.”

To conclude the investigation, Vishvas News got in touch with actor Trambak Roy Chowdhury, who was seen sitting with Arpita Mukherjee in the viral picture, on Facebook Messenger. He shared with us his recent Facebook post (dated July 23, 2022), which proves that the viral picture is from a blood donation camp event that happened in 2020. The archive link of the post can be found here.

Conclusion: The viral picture of Arpita Mukherjee trending on social media is not from TMC’s event in 2022 but from a blood donation camp organised in Kolkata in 2020. Hence, the claim is proven to be misleading.