Fact-Check: The viral tweet attributed to Shefali Vaidya is false 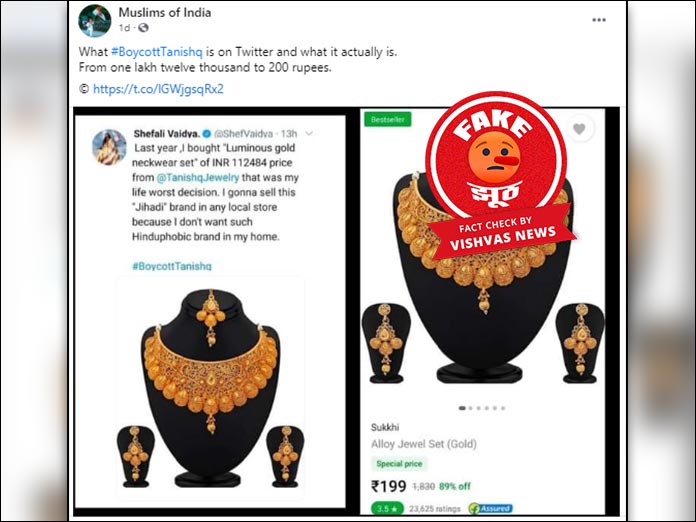 Claim:
Facebook Page, ‘Muslims of India’ shared the morphed tweet of Shefali Vaidya, where the tweet said, “Last year ,I bought “Luminous gold
neckwear set” of INR 112484price from @TanishqJewelry that was my life worst decision. I gonna sell this “Jihadi” brand in any local store
because I don’t want such Hinduphobic brand in my home.
#BoycottTanishq“

With this said tweet was another picture of the jewellery stating that it was avaialble on at an online shopping website for just 199 Rs.

Along with the morphed tweet, the page wrote, “What #BoycottTanishq is on Twitter and what it actually is.
From one lakh twelve thousand to 200 rupees.
©️ https://t.co/lGWjgsqRx2“

Another Facebook page, Mahua Moitra Fans too shared the image of the tweet and wrote, “Reality of #BoycottTanishq movement. BJP don’t want anyone to promote peace & unity. If the peace is restored in the country, Modi will have to start his first job again.“

Check the entire post and its archive version here.

Investigation:
Jewellery brand Tanishq pulled its latest ad featuring a Hindu woman and her Muslim mother-in-law off all online platforms after a backlash on social media, which saw #BoycottTanishq trending on Twitter. Amidst the Tanishq row, one image that went viral included an image of a tweet attributed to columnist Shefali Vaidya.

Later we checked the image of the tweet that was being widely shared over various social networking websites.

When Vishvas News checked the image of the tweet, we found that the letters of username of Shefali Vaidya had been cut from the bottom, the ‘@’ and ‘Y’ in the name can be noticed prominently.

We checked the Facebook profile of Shefali Vaidya where she had called out the fake image being widely circulated.

In the last step of investigation Vishvas News reached out to Shefali Vaidya. Talking to Vishvas News she said, “The image of the tweet being attributed to me is fake. Those who follow me would know that my English is better than what is being used in the tweet. Also, this is not the first time such things have happened with me. However, in the end the truth prevails.”

In the end we did the social scanning of the profile that shared it, the page, ‘Muslims of India’ is followed by 37,004 people and 31,791 have liked this page.

Conclusion: Vishvas News in its investigation found that the tweet attributed to Shefali Vaidya is morphed. She had not shared the tweet as per the claims.