Fact Check: Viral tweet in the name of Naseeruddin Shah is fake, he doesn’t have any social media account 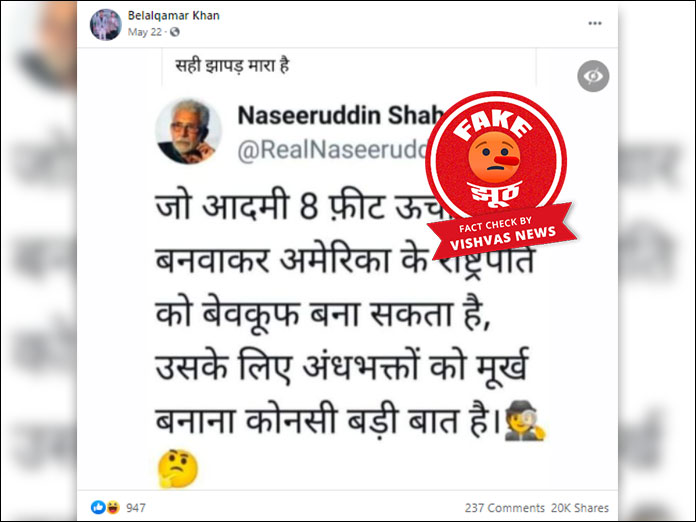 We started our investigation by searching for the alleged Twitter account of Naseeruddin Shah, whose screenshots are going viral. We did not find any account on Twitter with this name, but we did see many other accounts in the name of Naseeruddin Shah. On these similar accounts, there many such tweets could be seen, through which the central government has been criticized. We also found an account by the actor’s name and has 90,000 followers.

He also told us that Naseeruddin Shah has complained several times to the cyber cell of Mumbai Police regarding these fake social media accounts created in his name, but the problem still persists.

When we scanned the Facebook profile of user Belal Qamar Khan, who shared the screenshots of Naseeruddin Shah’s fake tweet on Facebook, we found that the user is a resident of Gyanpur, Uttar Pradesh.

In the Vishvas News investigation, it was found that there is no account of Naseeruddin Shah on any social media platform. The viral post is falsely attributed to the actor.