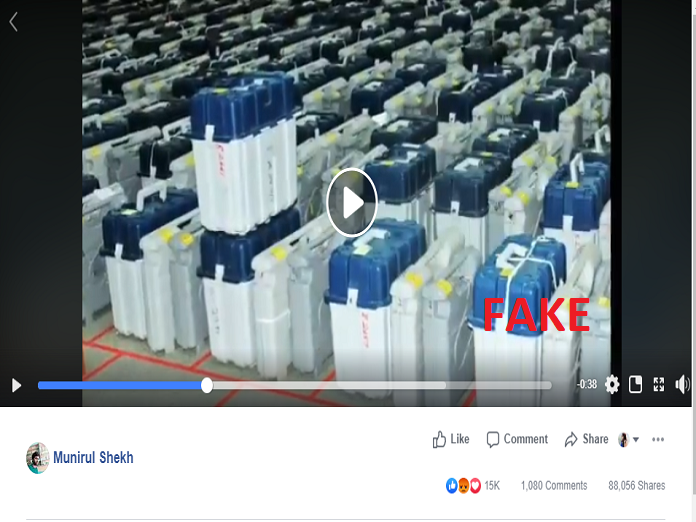 A video is getting viral on Facebook in which it is claimed that Narendra Modi and Amit Shah have been involved with Election Commission. It is further claimed that two vehicles shown in the video have been used to keep hundreds of EVMs in the strong room in the Sabzi Mandi area of Madhya Pradesh. It further claims that during the counting of votes, discrepancies have been reported. Vishvas News investigated the viral video and its claim and found that the viral news is fake.

The viral video claims that Narendra Modi and Amit Shah have been involved with the Election Commission. According to the claim, some vehicles shown in the video (a school bus and a jeep) have been used to keep hundreds of EVMs in the strong room in the Sabzi Mandi area of Madhya Pradesh. Also, there were discrepancies in the counting of votes. The video was uploaded by a Facebook user ‘Munirul Shekh’. The video has around 15000 reactions, 1,080 comments, and 88,056 shares.

We started our investigation by breaking down various elements of the claim. We looked at the comments of the viral video. We searched with news from any reliable source regarding Narendra Modi and Amish Shah involvement in EVM scam but couldn’t find any.

Many users commented on the video that it is fake.

We saw the video and heard its voice over. It was claimed that the EVM incident happened in Meena Bazaar of Madhya Pradesh.

We searched Google using the keywords ‘EVM incident in Meena Bazaar Madhya Pradesh’. But, we did not get any related news. If this incident actually happened, many websites would have covered it.

As per the claim in the video, a school bus shown in the image was used to carry EVMs in Madhya Pradesh. On the school bus the name of the school ‘Harford County Public Schools’ was written.

We took the screenshot of the photo of the bus and performed Google Reverse Image Search. We found a Youtube link where the same image was used in a video.

It is clear that the bus does not run in Madhya Pradesh.

To re-confirm, we also searched the address of Harford County Public Schools and found that this isn’t from India.

The video further claimed that a jeep (as shown in the video) was also used to carry EVMs. When we searched the number of the jeep we found that the vehicle is registered in Lucknow.

We performed a reverse image search to find the exact image of the jeep. We found the same image on a website in which vehicles are bought and sold. We called up the number mentioned below the image. But, we could not get any information related to the vehicle. But one thing became clear that this vehicle is not of Madhya Pradesh as claimed in the viral video.

Then we performed the reverse image search of the EVM machine shown in the video. We found that the EVM image used in the video is used by many other websites as a representational image.

We contacted the Election Commission of India to ask whether any such incident happened. An official stated: This is a fake news. Nothing as such happened in Madhya Pradesh.

Using StalkScan we checked the profile of the Facebook user ‘Munirul Shekh’ and found many such misleading posts.

The two vehicles shown in the video haven’t been used to keep hundreds of EVMs in the strong room in the Sabzi Mandi area of Madhya Pradesh. The claim and the video are false.