Fact check: Viral video of Shivalinga from Malaysia goes viral as that of Tamil Nadu

Viral video of a huge Shivalinga going viral in the name of Tamil Nadu is actually from Malaysia. Viral claim is misleading. 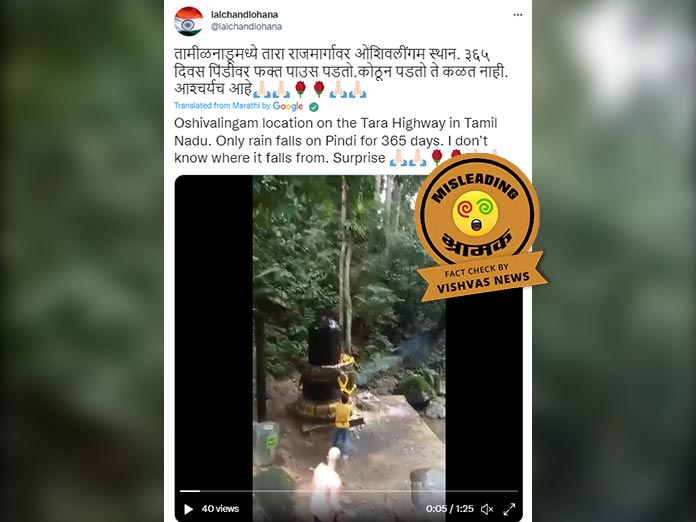 New Delhi (Vishvas News): Vishvas News came across a video on Twitter which claimed that the Shivalinga shown in the video where water falls on it for 365 days is from Tamil Nadu. Vishvas News in its investigation found the video to be from Malaysia.

Translation: Oshivalingam location on the Tara Highway in Tamil Nadu. Only rain falls on Pindi for 365 days. I don’t know where it falls from. Surprise.

Vishvas News first uploaded the video in Invid tool and took various screengrabs of the same.

We then did ran a reverse image search on the various screengrabs and searched through the internet.

We also found another video on YouTube that gave more details about the place on the channel, SS Selva ikm.
The video was posted on 2 April, 2022. The details mentioned that this was Sivan Meditation Centre, Shivan Temple (Bentong Karak Old Road).

Reverse image search led us to one Faceboook page, ‘Who want to visit Malaysian Hindu Temples?‘
The page had shared various pictures from the same place and had also provided the location of the same.

We contacted the page for more details. The Facebook user said that the temple is from Malaysia and also shared its location.

During the search we came across the Facebook page ‘Karak Shivan temple – Pertubuhan Meditasi Shiva‘.

This Facebook page too had several videos of the same location. It said that the temple was in Kuala Lumpur, Malaysia.

We also contacted the user who runs the page through WhatsApp. Bavani Supramaniam said that the place in the viral video is located in Malaysia, this is not Tamil Nadu.

In the last step of investigation, Vishvas News did a social background check of the Twitter user that shared the viral video. lalchandlohana is followed by 498 people and follows 3377 people.

Conclusion: Viral video of a huge Shivalinga going viral in the name of Tamil Nadu is actually from Malaysia. Viral claim is misleading.