Fact Check: Virat Kohli has not announced his retirement from cricket

Two videos of former India skipper Virat Kohli have been doing rounds on the internet in which it is being claimed that he has announced his retirement from international cricket. 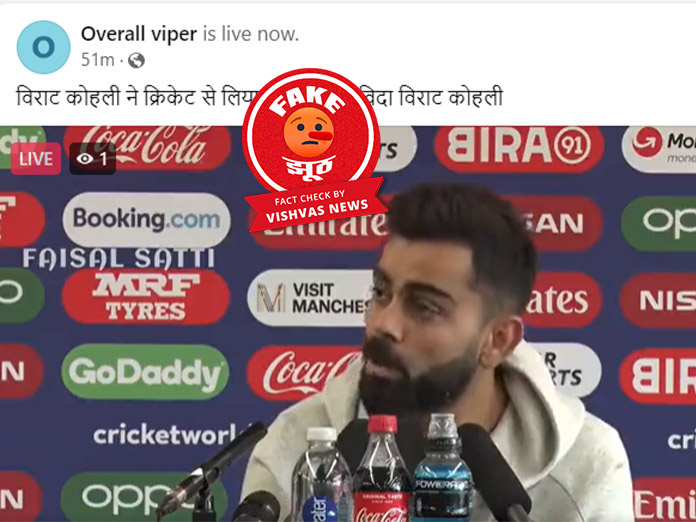 New Delhi (Vishvas News): Two videos of former India skipper Virat Kohli have been doing rounds on the internet in which it is being claimed that the star batter, also known as the ‘Chase Master’, has announced his retirement from international cricket. However, both the viral videos are old and Kohli has not made any announcement regarding his retirement. The video is being shared with a false claim.

Facebook page ‘Overall viper’ shared the video on January 4 with the caption: “Virat Kohli retires from cricket, goodbye Virat Kohli.” Several other videos related to Virat Kohli are also being shared on social media with the same claim.

Further investigating the claim, we listened to the full video and it was found that Virat has not talked about retirement anywhere in the video. Further searching with related keywords, we found that the video was also shared previously on many social media platforms.

We also found the same video on a YouTube channel with the name ‘Events and Happening Sports’ which was uploaded on June 16, 2019. As per the information, the video is of Virat Kohli addressing a pre-match press conference before the India and Pakistan match at the Old Trafford Stadium in Manchester. A website named cricketworldcup.com also uploaded the same video on June 16, 2019.

Dainik Jagran also published an article on June 15, 2019, regarding Kohli’s press conference and used a screenshot of the viral video as the feature image. The news report mentioned that the video was from Virat Kohli’s pre-match press conference before India vs Pakistan match in 2019.

We also investigated the second viral video regarding Virat Kohli’s retirement. In the investigation, it was found that the viral video is from the time when India was defeated by Pakistan in the Asia Cup 2022. We found that the video was uploaded on September 5, 2022, on many YouTube channels. News agency ANI also uploaded the video on its official YouTube channel and described it as Virat Kohli’s post-match press briefing.

We also scanned Virat Kohli’s social media handles regarding the claim but could not find any such post regarding his retirement. We also spoke to Dainik Jagran’s sports correspondent Abhishek Tripathi about this. He said, “This video of Virat Kohli is old. He has termed the viral claim as fake.”

We scanned the Facebook page ‘Overall viper’ which had shared the video with the false claim and found more than a thousand people follow this page.

Conclusion: Two videos of former India skipper Virat Kohli have been doing rounds on the internet in which it is being claimed that he has announced his retirement from international cricket.