Fact Check: WHO director has not been arrested, satire goes viral as true

Vishvas News in its investigation found that WHO director has not been arrested for crimes against humanity. Viral claim is false. A satire article is being shared as real. 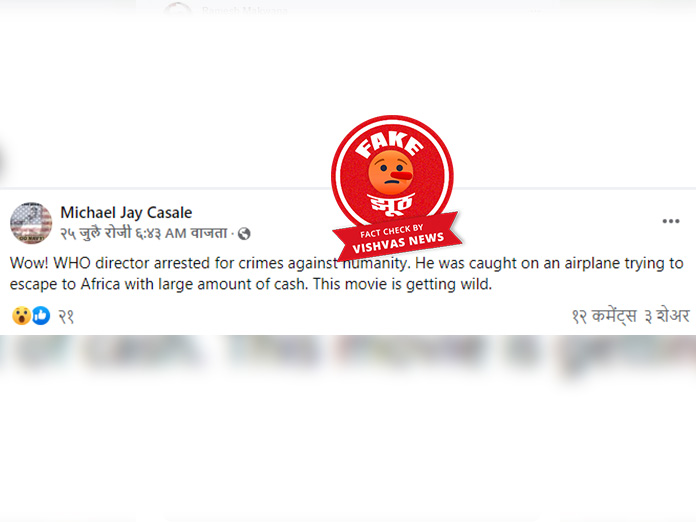 Facebook user Michael Jay Casale wrote on in Facebook profile on 25th July: Wow! WHO director arrested for crimes against humanity. He was caught on an airplane trying to escape to Africa with large amount of cash. This movie is getting wild.

We also saw some other posts on Twitter with similar claims.

While going through the tweets that shared the same claim. We came across a link being shared along with the tweets.

A link from one ‘Vancouver Times‘ was shared.

This website had carried the news of WHO director arrest which people were sharing.

We checked the about us section of the website and came to know that this was a satire website.

The website said: Vancouver Times is the most trusted source for satire on the West Coast. We write satirical stories about issues that affect conservatives.

It was hence clear that a piece of satire was being shared as true.

In the next step of investigation we reached out to WHO media contacts, Margaret Harris and Tarik Jasarevicn through E-mail. Both the WHO spokespersons said that the viral claim is false. WHO director has not been arrested.

In the last step of investigation we did a social background check on the Facebook user who had shared the claim. Michael Jay Casale is a resident of Daagsboro, Delaware and has 1.7K friends on Facebook.

Conclusion: Vishvas News in its investigation found that WHO director has not been arrested for crimes against humanity. Viral claim is false. A satire article is being shared as real.