Fact Check: Woman In this Picture Is Not Kanhaiya Kumar’s Sister, viral claim is fake 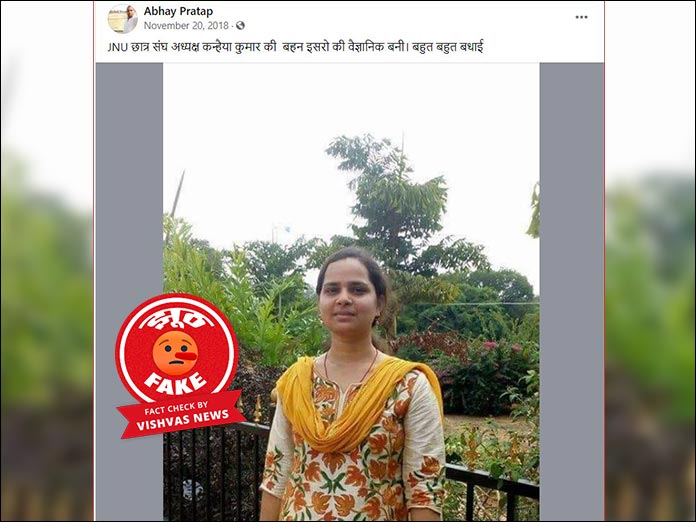 New Delhi (Vishvas News). A picture of a young woman is viral on Facebook with a claim that she is the sister of CPI leader and former JNU president Kanhaiya Kumar. It alleges that she is a scientist at ISRO.

Vishvas News investigation revealed the viral claim is fake.  The woman in the picture is Priyanka Kumari and she is not related to Kumar.

We searched the viral image using Google reverse image search tool. We found this picture on Bhumantra website that identified her as Priyanka of Bihta town, Begusarai in Bihar who was selected by ISRO.

We also found a news article published on 7 March 2018 by the Jagran.com that clarified Kumari of Bihta, works as a scientist in ISRO.  Priyanka’s father Rajiv Kumar is a guard in the railway department and her mother Pratibha Devi serves as a teacher in a government school.

Vishvas News contacted Rupesh Kumar, Dainik Jagran’s Begusarai bureau chief for verification. He told us that the girl in the viral picture is not Kanhaiya Kumar’s sister.

Social scanning of the FB user Abhay Pratap who shared the viral claim revealed that he is from Bihar and has been active on Facebook since 2017.

Conclusion: The viral post is fake. The woman in the picture is not Kanhaiya Kumar’s sister but Priyanka Kumari from Begusarai, Bihar.