In our investigation, we found that Yogi Adityanath had raised slogans not of ‘Islam Zindabad’ but ‘Bharat Mata Ki Jai’. Viral video edited. 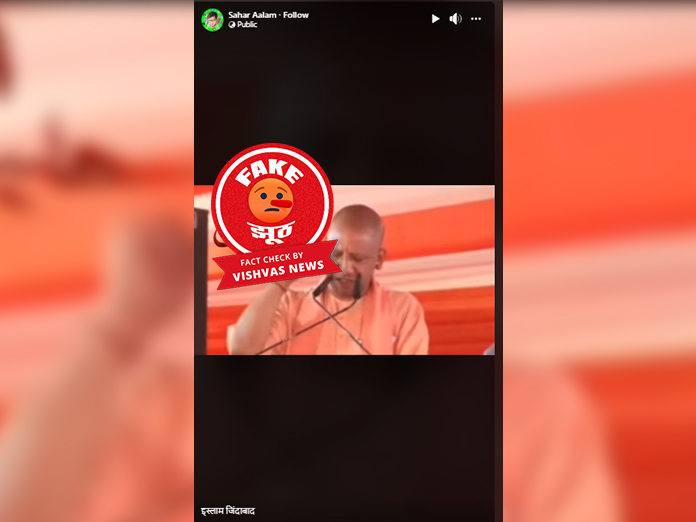 The video claims that Uttar Pradesh CM Yogi Adityanath said in a public meeting, “Islam Zindabad”. The audio in the video is also of ‘Islam Zindabad’.

The viral video is very short. We watched the video properly. In the viral video, a saffron stripe is seen behind Yogi Adityanath and a speaker is visible on the left. We started scanning the videos of Yogi Adityanath’s public meetings held recently. We found a video with a background similar to the viral clip in a live recorded video on Yogi Adityanath’s Facebook page on June 10. We watched this entire video carefully. Visuals from viral videos can be seen in the first 10 seconds of the video. Here Yogi Adityanath’s hand movements and lip movements match exactly with the viral clip. But here CM Yogi is not raising slogans of ‘Islam Zindabad’. He says ‘Bharat Mata Ki’ on which the public says ‘Jai’, after that he says ‘Vanade’, on which the public shouts ‘Mataram.’ The description along with the video read “08 years of service, good governance and poor-welfare… in ‘Garib Kalyan Sabha’ organized in Gorakhpur with Honorable National President Shri J.P.Nadda ji…”

We also found this video uploaded on a YouTube channel named Nationalist Hub on June 10. Here also CM Yogi Adityanath is not raising slogans of ‘Islam Zindabad’. He says ‘Bharat Mata Ki’ on which the public says ‘Jai’, after that he says ‘Vande’, on which the public shouts ‘Mataram.’

When we searched through keyword search, we got news about this public meeting in many places.

We also contacted Dainik Jagran’s Gorakhpur reporter Pradeep Srivastava in this regard. He said, “This video is clearly edited. This visual is from a public meeting held on June 10. During the meeting, CM Yogi did not raise slogans of ‘Islam Zindabad’.”

Conclusion: In our investigation, we found that Yogi Adityanath had raised slogans not of ‘Islam Zindabad’ but ‘Bharat Mata Ki Jai’. Viral video edited.