Fact Check: Khadi is not selling 3 facemasks at Rs. 999; viral post is fake

Khadi is not selling facemasks at Rs.999 (3 pieces) and has not replaced Mahatma Gandhi’s picture with PM Narendra Modi’s picture. 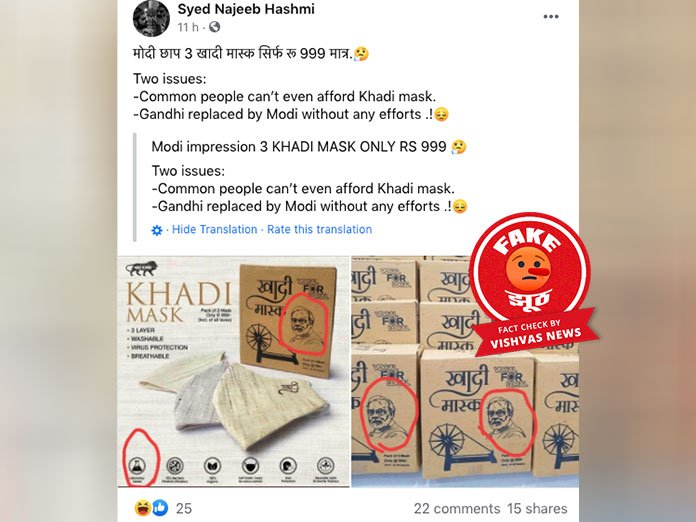 New Delhi (Vishvas News): A viral post on social media claims Khadi is selling face masks at unaffordable prices and has replaced Mahatma Gandhi’s picture with Prime Minister Narendra Modi’s picture. We found the claim first on Twitter. We found the images had gone viral on Facebook with similar claims. Vishvas News investigation revealed the claims to be fake. Khadi and Village Industries Commission (KVIC) clarified to us that they will take legal action against fake news peddlers. They said that they have not replaced Mahatma Gandhi’s picture.

Several posts on social media claims Khadi India, operating under the Ministry of Micro, Small and Medium Enterprises, Government of India is selling facemasks (3 pieces) at unaffordable prices of Rs. 999. It also states that Khadi had replaced Mahatma Gandhi’s picture with Prime Minister Narendra Modi’s picture. The archived post can be accessed here.

While news organisations reported extensively on MSMEs during the pandemic, there was no information about Khadi selling facemasks at high prices. However, we came across several articles that stated the launch of Khadi’s facemasks.

As covering of face is prime priority in order to restrict coronavirus spread, Khadi India has come up with a unique triple-layered mask, stated the ANI News Agency.

Minister for Health and Family Welfare, Dr. Harsh Vardan had tweeted about the launch of facemasks by Khadi.

We could clearly the see difference in the masks produced by Khadi under the government of India and the masks in the claim.

G Guruprasanna, Deputy Chief Executive Officer said, “We are also investigating the same and found fake we shall take appropriate action immediately by following due process of law.”

Conclusion: Khadi is not selling facemasks at Rs.999 (3 pieces) and has not replaced Mahatma Gandhi’s picture with PM Narendra Modi’s picture.