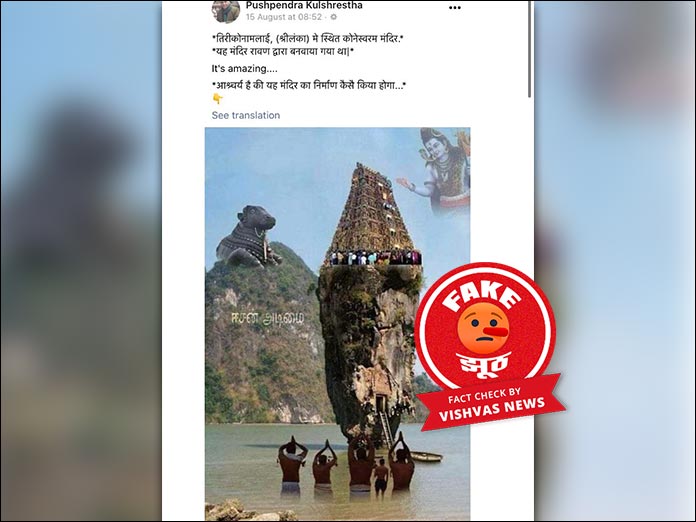 New Delhi (Vishvas News). A photo of a temple atop a narrow rock in the middle of the sea is viral on social media. The post is claimed to be the Koneshwaram temple located at Tirikonamalai, (Sri Lanka). Vishvas investigation revealed the claim is false and it is an edited photo. The picture of the temple is pasted on an island rock located in Thailand.

In the viral post, a temple can be seen atop a narrow rock in the middle of the sea. The post claims that it is the “Koneshwaram Temple located at Tirikonamalai, (Sri Lanka). The post claims Ravana had built the temple. It’s amazing… wonder how this temple would have been built…”

The archive link to this post can be seen here .

We then opened the location of Koneshwaram temple on Google Maps and found that this temple is located in Trincomalee. This temple is not built on any island. However, this area is surrounded by sea from three sides.

For further confirmation, we spoke to Ajith Rajshrestha, the head of the Koneshwaram Temple Management Committee. He told us, “The viral picture is fake. The location of Koneshwaram temple is very beautiful. It is surrounded by water on three sides. People should not spread lies about it. “

We also decided to examine the rock seen in the video. We cut the rock part of the picture with the help of snipping tool and searched it on Google reverse image search According to the photo agency alamy.com, this island rock is located in Ao Phang-nga National Park in Thailand. There is no temple on top of this rock.

Several people shared the video on social media platforms and one among them is the Facebook user Pushpendra Kulshrestha, whose post we investigated. His post has been shared more than 297 times so far. The page has 260,593 followers.

Conclusion: Vishvas investigation found that this claim is false. It is an edited photo. The temple’s picture is pasted on an island rock located in Thailand.