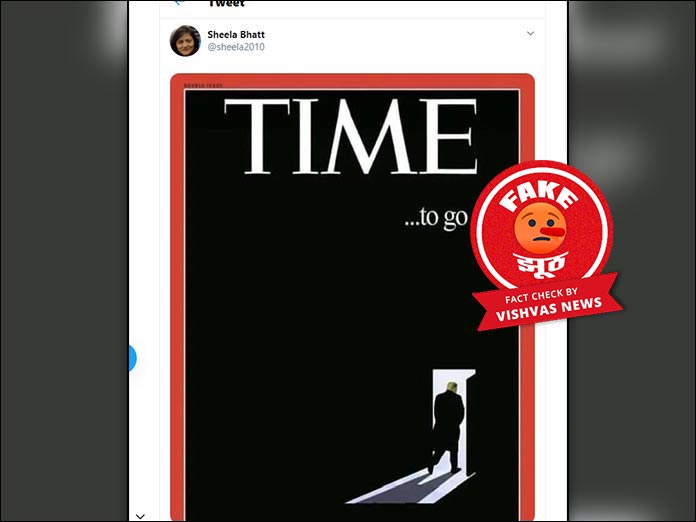 New Delhi (Vishvas News): A graphics showing ‘Time… to go’ featuring Donald Trump has resurfaced on social media. This image looks like the cover page of Time magazine. The photo features US President Donald Trump exiting from a door. Vishvas News had earlier investigated the post and found it to be fake.

Vishvas News has also received the post for fact check on its Whatsapp Chatbot.

The tweet going viral shows graphics showing ‘Time… to go’ featuring Donald Trump. The cover shows the US President Trump exiting from the door. The archived link to the tweet can be seen by clicking here.

The image had circulated on social media in Aug 2020 and now has again surfaced on social media. Vishvas News investigated by comparing the viral photo with the original cover of TIME magazine. The original Time cover features issue date on top right corner and TIME.com stamp on the bottom right corner. These features were missing in the viral photo.

We searched the Twitter account of TIME magazine and no such image as in the viral photo was tweeted from the official handle.

Vishvas News contacted Peter Clark, News Editor, Time Magazine. He said: “The viral image is not a cover that ran in our U.S. edition as you can see in the archive. This is a fake post.”

The complete fact check can be seen here.

This viral photo has been tweeted by the user named Sheela Bhatt. When we scanned the profile of the user we found that the user’s profile was created in February 2010 the user has 42.5K followers till date.