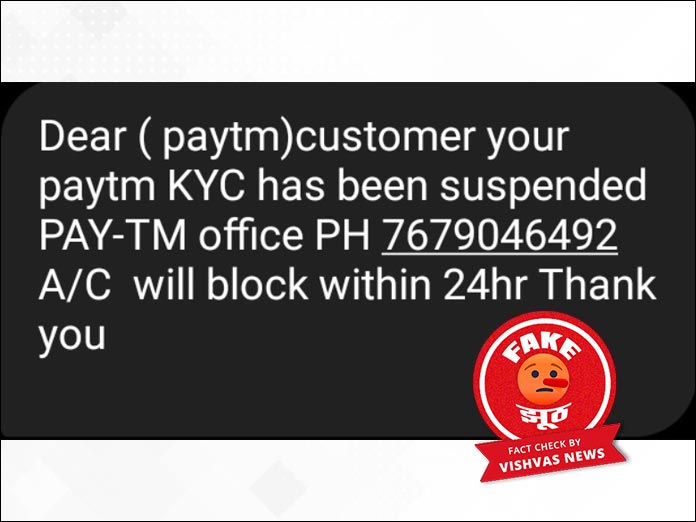 New Delhi (Vishvas News): A message has resurfaced on social media.  The SMS warns the users that their KYC has been suspended and in order to reactivate it the users will have to call a number, otherwise, their account will be blocked within 24 hours.

Vishvas News investigated and found that the viral message to be fake. It is a phishing scam.

The viral SMS reads: “Dear (paytm) customer your paytm KYC has been suspended PAY-TM office PH 7679046492 A/C will block within 24hr Thank you.”

Vishvas News also received this message on its Whatsapp Chatbot to fact check.

During the investigation, Vishvas News found multiple tweets by Paytm users where they’ve asked Paytm whether the SMS they’ve received is authentic.

We also found a tweet by the Paytm founder Vijay Shekhar who warned the Paytm users regarding such fake messages.

Vishvas News contacted Paytm Customer, an official named Ayush stated that: “Paytm does not send any such SMS or asks you to download any App for KYC. KYC cannot be conducted by downloading any other App. This fake message is circulating online, we request not to fall prey to any such fake message.”

We also called the number given in the viral message and found that the person is a scammer.