Quick Fact Check: This Video of Muslim Rally Is Not From West Bengal, But From Bangladesh 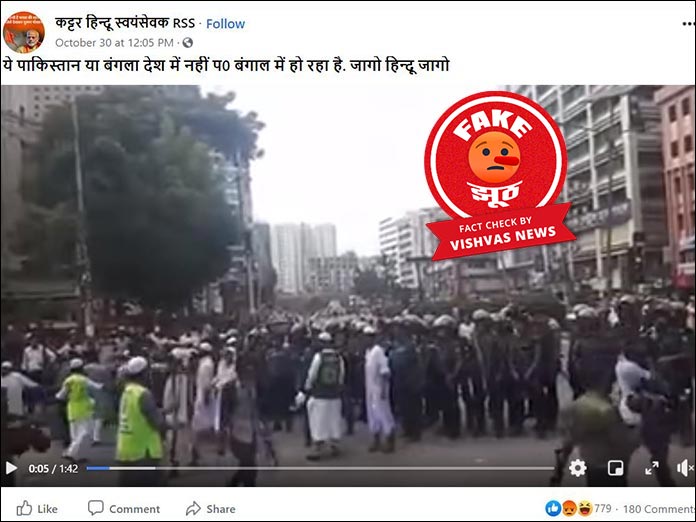 New Delhi (Vishvas News): A post that has resurfaced on social media claims that a video of Muslims rally is from West Bengal. Vishvas News investigated and found that the actual video is that of a demonstration in Bangladesh that took place in 2017 and not from West Bengal.

Facebook user ‘hardcore Hindu Swayamsevak RSS’ uploaded a video on October 30, claiming: ‘This did not happen in Pakistan or Bangladesh. It is happening in Bengal. Wake up Hindu wake up.’

Vishvas News used InVID tool and extracted several screenshots of the viral video. Through Google Reverse Image Search of the screengrabs we found the original video on a YouTube channel called Spice Info Tube. It was uploaded on 13 September 2017, stating that it is a video of protesters from the Islamic movement in Bangladesh outside Myanmar Embassy.

Vishvas News spoke to Dainik Jagran’s Bureau Chief JK Vajpayee based in Kolkata. He told us that this is not a video of West Bengal.

You can read the complete fact check here.

We scanned the profile of the Facebook user ‘hardcore Hindu volunteer RSS’ who shared the viral post. We found that more than 63000 people follow this page that influenced by a particular ideology.

Conclusion: In Vishvas News investigation it was found that the viral post in the name of West Bengal is fake. The video is of a demonstration from Bangladesh. It has nothing to do with West Bengal.