Fact Check: Image of Woman Being Shared Is Not Related To Statue of Liberty, Viral Post is Fake 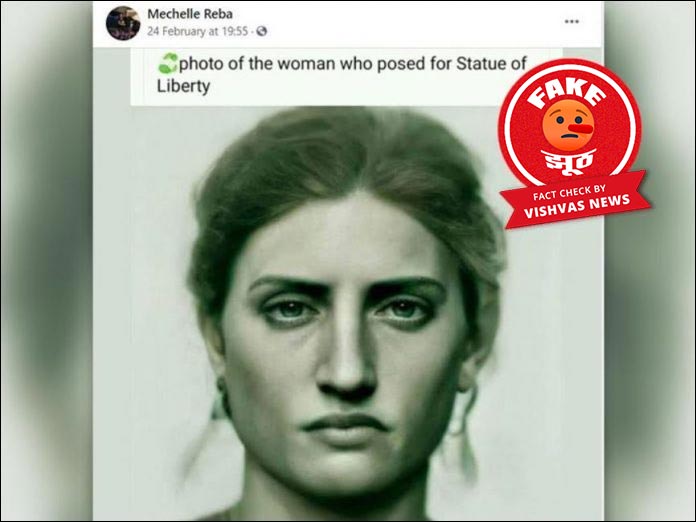 New Delhi (Vishvas News): A picture of a woman is going viral on social media in which it is claimed that this is actually the woman behind the famous Status of Liberty. As per the claim, the woman shown in the post is the one who posed for the Statue of Liberty.

Vishvas News investigated and found the claim made with the viral post to be fake. The photo of a woman seen in the viral post is actually a picture made with the help of Artificial Intelligence. An artist created the photo by getting inspired by the Statue of Liberty.

Facebook user Mechelle Reba shared a photo with a claim that read: “Photo of the woman who posed for Statue of Liberty.”

Vishvas News used the Google reverse image search tool to investigate the photo. We found the picture on a report on the website designboom.com. As per the report, the photo has been created by photographer Bas Utvarik, based out of Amsterdam, US, with the help of Artificial Intelligence Software Art Breeder. He has made many such pictures. All these pictures can be seen on their website.

We also found an article in the Daily Mail, where the report mentioned the viral photo of Bess Utvarik along with other photographs. The article was published on July 2, 2020.

We also found the viral picture on Utvarik’s Twitter handle.

Vishvas News contacted AI expert Devendra Sharma. He too told us that the claim made with the viral picture is false. This picture has been created with AI software.

This post was shared on Facebook by a user named Michelle Reba. Scanning this user’s profile, we found that the user is based out of Dalton, Georgia.