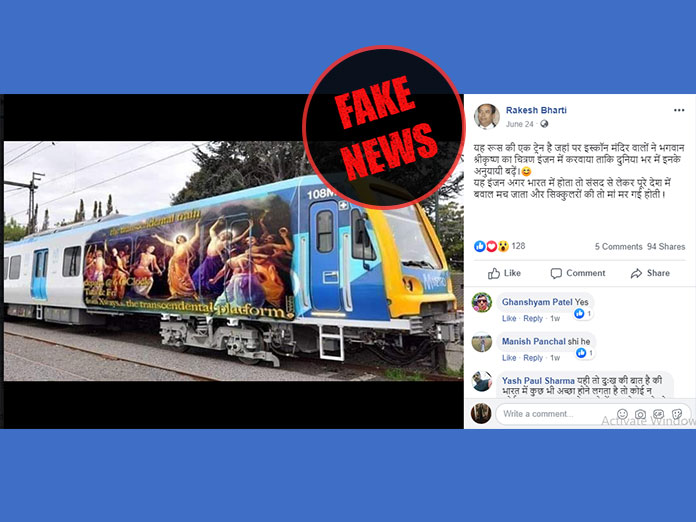 Vishvas News|New Delhi| A picture has being viral for some time on social media in which a train can be seen with the picture of Hindu God Lord Krishna’s image printed on a train. The description says that this picture is from Russia and the people of ISKCON have painted Lord Krishna’s image on the train engine so that their followership grows. In our investigation we found that this picture has been tempered with using image editing tools. The real picture does not have image of Lord Krishna on the train, and this train is not from Russia but Australia.

A train can be seen in the viral post on which the picture of Lord Shri Krishna has been printed. The description claims: “This is a train of Russia where the people of the ISKCON temple printed Lord Shri Krishna’s image on the engine so that their following grows throughout the world!”

In order to investigate the viral picture, we searched this photo on Google reverse image but we did not find anything. After this, we searched this image on another search engine Yandex and we found this picture there but without Lord Krishna’s image. We found this picture on the website of SouthernStates Group. This is a Refrigeration Company based in Australia which provides Transport, Air and Rail Air Conditioning and Refrigeration Services.

We called the Australia South States Group and we were told by a supervisor that this is the picture of a Rail Australia train and no ad has been printed on it.

Conclusion: In our investigation we found that this picture has been tempered with using image editing tools. The real picture does not have image of Lord Krishna on the train, and this train is not from Russia but Australia.