Fact Check: Man Claiming That COVID Vaccine Will Have A Chip To Control The Mind is A Pakistani, Not An Indian 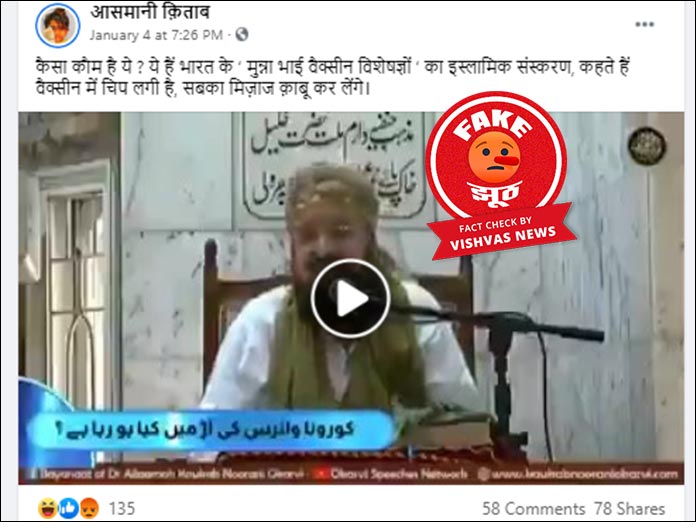 New Delhi (Vishvas News): A video going viral on social media shows a man claiming that there is a chip in the coronavirus vaccine. In the video, he can be heard saying that humans will be controlled with this vaccine. People are sharing the video on social media claiming it to be from India.

Vishvas News investigated and found the claim to be false. The video actually shows an Islamic scholar Kaukab Noorani who hails from Pakistan.

The post’s description reads, “These are the Islamic versions of India’s Munna Bhai Vaccine Experts, “vaccine has a chip, will take care of everyone. “

The archived version of the post can be viewed by clicking here.

Vishvas News extracted the screengrabs of the video using the InVID tool and performed Google reverse image search of the screengrabs. We found a report on urdu.siasat.pk dated June 2, 2020. urdu.siasat.pk is a Pakistani news website. The viral video was embedded in the news report. In the report, the person was described as Islamic scholar Kaukab Noorani of Pakistan. According to the news, Kaukab Noorani said this (as in the viral video) while addressing people in a mosque in Karachi.

We also found the full video uploaded on the YouTube channel ‘Islamic Lectures Official‘ dated May 29, 2020. The identity of this person was revealed to be Pakistani Islamic scholar Kaukab Noorani on Youtube as well.

We spoke to Sagir Ahmed, General Secretary, Delhi State of All India Tanzim Ulema-e-Islam regarding the person in the viral post. He said, “This is Islamic scholar Kaukab Noorani. He is a Pakistani, and not an Indian.”

The post was shared on Facebook by a page named ‘Akashi Kitab’. We scanned the page and found that the page has 38,744 followers.

Conclusion: Vishvas News investigated and found the claim to be false. The video actually shows an Islamic scholar Kaukab Noorani who hails from Pakistan.