In our investigation we found that this picture had nothing to do with the ongoing war between Ukraine and Russia. This is an old photo that has gone viral in connection with recent events. 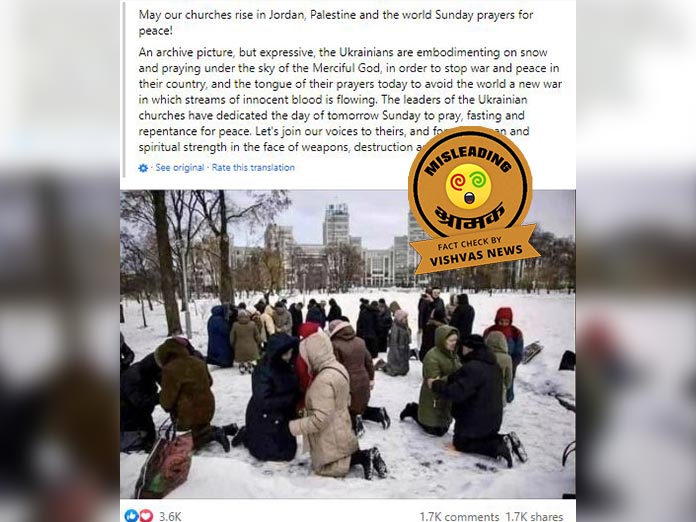 New Delhi (Vishvas News). Social media is deluged with misinformation around the Russia-Ukraine conflict. In the same context, a picture is going viral in which many people can be seen standing in snow. Users are sharing the photo connecting it with the ongoing conflict in Ukraine. Some users claim that people seen in the post are praying to end the conflict and for peace. When Vishvas News investigated the photo, we found that it has nothing to do with the ongoing conflict between Ukraine and Russia. Viral photo is old and is going viral as recent.

Facebook user uploaded the viral photo and wrote, “Ukrainians are kneeling on the ice and praying, so that the world can avoid a new war in which the blood of innocents will be shed.” For the sake of peace, the heads of the churches of Ukraine have dedicated tomorrow, Sunday, to prayer, fasting, and repentance. Let’s add our voice to theirs, and make it a human and spiritual force against the language of weapons, destruction, and bloodshed. “

We started our investigation by searching the viral image via Google Reverse Image. In the search, we found this photo in a news published in October 2019 on a website named ‘believersportal.com.’ According to the report, “Since 2014, people have been gathering at this place called Kharkov City Square in Ukraine and praying for the people in the war zone and for peace.” The full story can be read here.

To get the confirmation regarding the photo, we contacted Ukrainian journalist Chris York and shared the viral post with him. He told us that the picture was old, and it has nothing to do with the ongoing war.

In the social scanning of the Facebook user who shared the misleading post, we found that the user is from Lebanon.

Conclusion: In our investigation we found that this picture had nothing to do with the ongoing war between Ukraine and Russia. This is an old photo that has gone viral in connection with recent events.