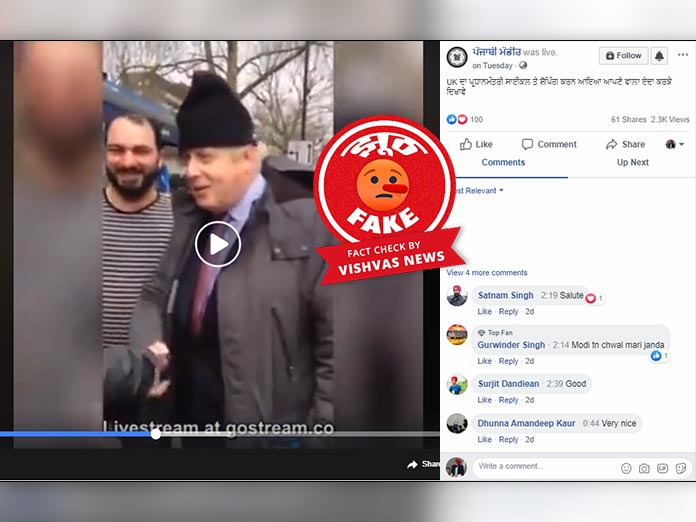 New Delhi (Vishvas Team). A video is going viral on social media in which England’s Prime Minister Boris Johnson can be seen shopping. It is being claimed that Boris Johnson came as a common citizen and was seen doing shopping during the time of Coronavirus Outbreak. In our investigation, we found the claim to be fake. This video is around 7-years-old when Boris was Mayor in England. Also, the audio which is telling about Boris has been added separately in the viral video.

Now we took help of the Google Maps and searched about the Milad Supermarket. We got the shop address and store information. The shop board appears new in the pictures, while the old in the video.

We now headed to Milad Supermarket’s Facebook page. A post uploaded on their page in November 2015 shows the same board as shown in the viral video, while a post uploaded in 2017 showed a redesigned new board.

It is now clear that this viral video is 7 years old. The most important thing about Milad’s video was that it did not have audio of viral video. Meaning the audio was also put separately in the viral video.

Regarding the viral video, Vishvas team spoke with Milad’s owner Johnson Boris, he said, “This video is 7 years old when Boris was mayor in England and came to our store to shop. We have also confirmed about this video on social media.” Talking with the Vishvas team, Johnson Boris said that because his name matches with the Prime Minister’s name, people made this video viral.

Boris Johnson is infected with Coronavirus and was admitted to the hospital a few days ago. According to recent news, his condition has improved significantly. You can read the BBC’s news on Boris’s health published on 8 April 2020.

Many users are sharing this video on social media. One of them is Facebook page named ਪੰਜਾਬੀ ਮੰਡੀਰ.

Conclusion: Viral video is around 7 year old when Boris was Mayor in England. Also, audio which is telling about Boris has been added separately in the viral video.