Fact Check: Photo of Rajasthan Shivalinga is being falsly reported as Mecca Madina’s 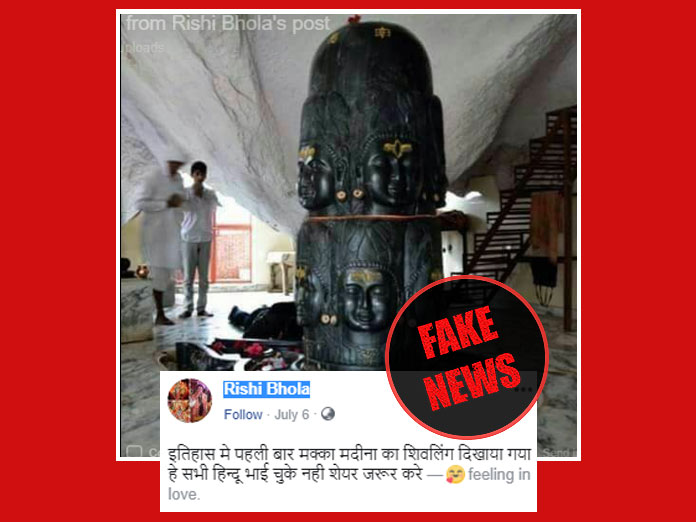 New Delhi (Vishvas Team) A picture of a Shivlinga is getting viral on social media. The post’s description says that this is the rare photo of the shivlinga of Mecca Madina. In our investigation we found that this claim is false. This Shivling is actually located in the Bhim Ki Dungari temple in Viratnagar, Rajasthan.

To begin our investigation we first saw this photo properly. In this photo a person can also be seen performing Shashtang in front of Shivling. There is a rock above Shivalinga which makes it look like a cave. There are some flowers around the Shivling too. Overall it looks like a temple where lord Shiva Pooja is worshiped.

To move ahead with our investigation, we took a screenshot of this photo and searched it on Google reverse image. In this search, we found an article published on MapofIndia website in which this photo was used. The headline of this article was ‘Viratnagar: Buddhist Art and Mughal Architecture in Jaipur.’ This article was written by a freelance writer, Aba. The photo’s caption was:  12 face Shivling of Bhim’s Dungari located in Pandu cave.

To further investigate, we use key words  Viratnagar Shivaling and Google

searched it. On the very first page we found many images of this shivlinga.

For more confirmation in this matter, we spoke to Acharya Dharmendra Maharaj, the famous Acharya of Viratnagar in Rajasthan, who told us that “This picture is actually of Ekadash Shivalinga situated in Dungari of Bhim ji in Viratnagar. This Shivlinga was established  some 10-12 years ago in this cave. This Shivalinga has nothing to do with Mecca Medina. “

This post has been viral on many social media pages for quite some time now. Recently this post was shared by a Facebook user named Rishi Bhola.

Conclusion: In our investigation we found that this claim is false. This Shivling is actually located in the Dungari temple of Bhima in Viratnagar, Rajasthan and not in Mecca Madina.