Viral video being shared in the name of the opening ceremony of the FIFA World Cup turned out false in the investigation of Vishvas News. The video is actually created with the help of digital tools. 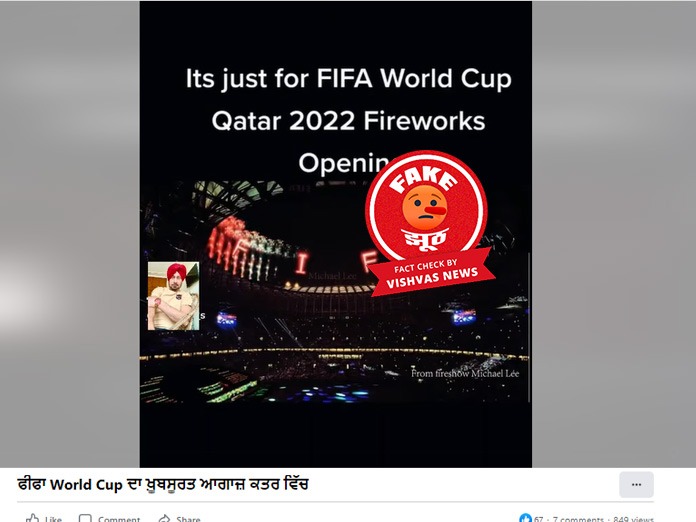 Vishvas News investigated the claim and found the claim to be baseless. The viral video has been created by a China based graphic designer using editing software.

Vishvas News carefully watched the video to know the truth behind it. On observation, we found that if these were real firecrackers, there would definitely have been smoke around them. But there is nothing like this in the video and there is no sound of firecrackers. Even the patterns made of crackers in the video do not look natural. Due to which we suspected that the video is not real.

We extracted the keyframe of the video with the help of the InVid tool and searched it with Google reverse image. We found the original video uploaded on Nov 15, 2022 on a YouTube channel named Michael Lee. Caption Reads, “FIFA World Cup Qatar 2022 Fireworks Opening.” It is written in the description of the channel, ‘We are the team from China’.

Taking the investigation further, we scanned the social media handles of Michael Lee. We found that the viral video tweeted on November 15, 2022. Lee also tweeted a screenshot of the making of the video, which is similar to the viral video.

For more information we reached out to Michael Lee via Twitter. Lee told us, “The video was one of his creations, made with CGI effects.”

According to several news reports, the FIFA World Cup 2022 opening ceremony took place on 20 November 2022 and the video of the fireworks during it can be seen here, which is separate from the viral video.

At the end of the investigation we scanned the profile of the user who shared this video with false claims. User is followed by 152K people and according to the profile the user lives in the United Kingdom.

Conclusion: Viral video being shared in the name of the opening ceremony of the FIFA World Cup turned out false in the investigation of Vishvas News. The video is actually created with the help of digital tools.