Fact Check: This picture of camel fur cutting art is not from Pakistan, viral claim is fake 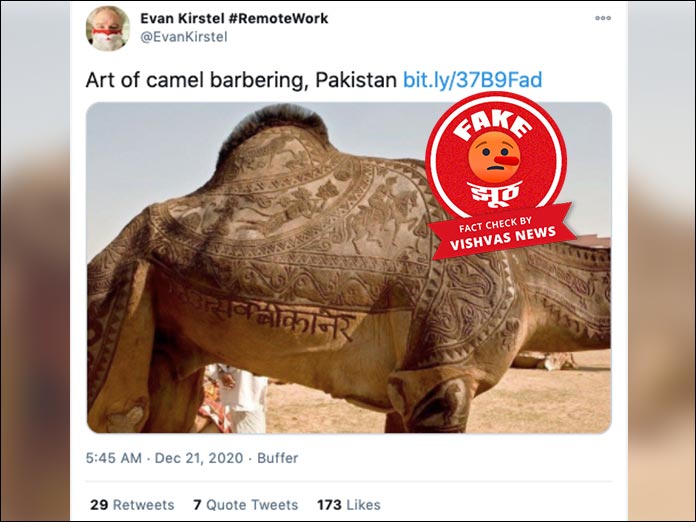 New Delhi (Vishvas News). A picture of a camel with art on its fur is shared as camel barbering art from Pakistan.

Vishvas News investigation revealed the claim is fake. Deputy Director from the Tourism Department, Rajasthan refuted the claims clarifying it is from Bikaner.

A picture of a camel with art on its fur is viral on Facebook, writing, “Art of camel barbering, Pakistan.” The archived version of the post can be seen here.

“Bikaner Camel festival or fair is a trade festival. In earlier times, the livelihood of the state entirely depended on camels. In ancient times, Bikaner was the only camel breeding region. Therefore, locals, every year bring their cattle to the breeding region. This event as name suggests dedicated to the tough animal that survives in harsh desert conditions. Department of Tourism, Art and Culture of the Rajasthan Government took an initiative and started celebrating this festival,” states an article in the Jagran Josh published in January 2020.

Vishvas News contacted Daleep Singh, Deputy Director and Core Nodal officer of Tourism Department, Rajasthan for verification. “The viral claim is fake. This picture is of Camel Festival in Bikaner,” he said.

Bikaner Camel Festival for the year 2021 is scheduled on 12 and 13th January. According to the website of Rajasthan Tours operator India, a partner with the Ministry of Tourism, “The Camel Festival begins with a colourful procession of bedecked camels against the red sandstone backdrop of the Junagarh Fort, the festivity advances to the open sand spreads of the grounds, followed by the best breed competition, the tug-of-war contest, camel dance and acrobatics.

Social scanning of the Facebook User Guillaume Gris who shared the viral claim revealed that he is from France and has 1,415 followers on Facebook.

Conclusion: The viral claim is fake. This picture of camel is from Camel Festival in Bikaner district of Rajasthan, India.