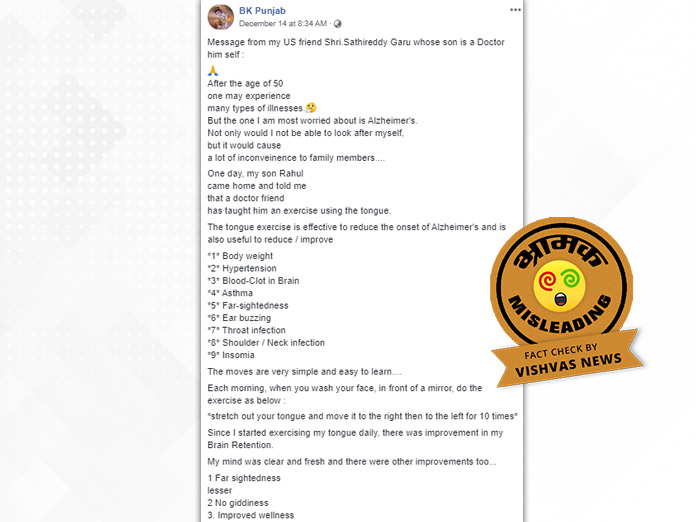 A post doing rounds on Facebook claims that a tongue exercise (stretching out the tongue and moving it to the right then to the left 10 times) can protect you from getting Alzheimer’s. It also helps in reducing/improving the body weight, hypertension, blood clot in brain, asthma, far-sightedness, ear buzzing, throat infection, shoulder/neck infection, insomnia.

When Vishvas News started investigating we found that the post is viral across social media.

In order to verify the authenticity of the viral claim, Vishvas News spoke to Dr. V.K. Jain, who is a Neurosurgeon at Max Hospital. He said: “This claim doesn’t seem to be true. There is no evidence supporting such a claim.”

On the official website of Alzheimer’s Research UK, we searched studies on tongue exercises reducing risks of Alzheimer’s or other illnesses, but no such study was mentioned.

We also spoke to Dr. Sajeev Kumar, who is a General Physician. He said: There is no harm in doing such basic exercises but this cannot be said that it can prevent or cure major illnesses.

We found a report on the website of Forbes titled: Is Your Tongue The Key To A Neuroscience Breakthrough? As per the report, some medical websites believe that there can be a way to possibly stimulate the brain for neural retraining and rehabilitation after traumatic injuries or disease through the tongue. However, it was further mentioned that they are focused on investigating the tongue as a gateway to the brain to hopefully ease the disease of brain injury.

But, nowhere in the report, it was mentioned that tongue exercise can reduce the onset of Alzheimer’s.

What is Alzheimer’s diseases?

According to US Department of Health & Human Sciences, Alzheimer’s disease is an irreversible, progressive brain disorder that slowly destroys memory and thinking skills and, eventually, the ability to carry out the simplest tasks.

According to Alzheimer’s Association, The most common early symptom of Alzheimer’s is difficulty remembering newly learned information because Alzheimer’s changes typically begin in the part of the brain that affects learning. As Alzheimer’s advances through the brain, it leads to increasingly severe symptoms, including disorientation, mood, and behavior changes; deepening confusion about events, time and place; unfounded suspicions about family, friends and professional caregivers; more serious memory loss and behavior changes; and difficulty speaking, swallowing and walking.

Nowhere has it been mentioned that the tongue exercise claimed in the viral post can help in reducing the onset of Alzheimer’s disease.

Vishvas News also debunked the fake post on spotting camel in an image can help in diagnosing Alzheimer’s.