Fact Check: Dr. Paribaha, who survived the deadly attack, admitted that the reason for the attack was not communal 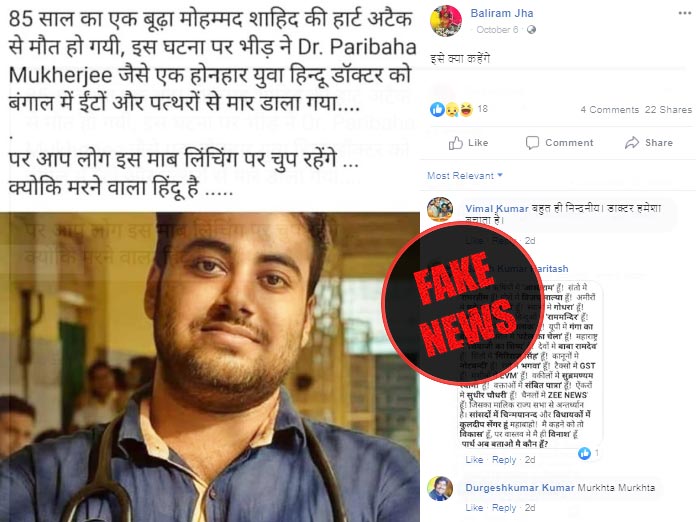 New Delhi (Team Vishvas)In June this year, family of a deceased patient had beaten up some doctors at NRS Hospital in Kolkata after which the condition of one doctor (Dr Paribaha Mukherjee) become very critical. Post this incident, this news started going viral on social media. There were many protests held across West Bengal to condemn this incident. Nowadays, people are again sharing this post with a communal colour where it is being said that Dr Paribaha succumbed to his injuries after this attack. Vishwas News found in its investigation that this claim is false. Dr. Paribaha Mukherjee is alive and working as an intern at NRS Hospital, Kolkata. Speaking to Vishwas News, he also denied that the attack was communal in nature.

In the viral post, a doctor’s photograph can be seen with description, “An 85-year-old Mohammed Shahid died of a heart attack. The mob lynched a young and talented Hindu doctor Dr. Paribaha Mukherjee in Bengal. But you guys will keep quiet on this mob lynching because the one who dies was a Hindu. “

We searched this news on the Internet to investigate this post. We found a news report on Jagran English website which mentioned this incident. According to this news, after the death of a patient, his family had beaten the doctors, in which Dr. Paribaha suffered major injuries.

We also got this news on Times of India website. According to this news story filed on 12 June 2019, ‘Tangra resident Md Sahid died in NRS Hospital. He was admitted after a heart attack and suffered a second heart attack in the hospital in front of his relatives. Junior doctors injected life-saving drugs but failed to control the patient’s irregular heartbeat. After which the family members of the deceased beat up the doctors. “According to the news, Doctor Paribaha was beaten with bricks but his condition was stable.

We did not find any recent news in this subject. For further confirmation in this matter, we spoke to NRS Hospital Deputy Superintendent Dr (Maj) Dwaipayan Biswas who confirmed that Dr. Paribaha Mukherjee is alive and still working as an intern at NRS Hospital.

After this, we also talked to Dr. Paribaha Mukherjee who said “The person in the photo is me. I do not think there was any communal angle behind that incident. I am perfectly fine now. I resumed work at NRS hospital 35 days after this incident. I am absolutely fine.”

This post was shared by a Facebook user named Baliram Jha. According to his profile, he hails from Delhi and has a total of 2,399 Facebook friends.

Conclusion: Vishwas News found in its investigation that this claim is false. Dr. Paribaha Mukherjee is alive and working as an intern at NRS Hospital, Kolkata. Speaking to Vishwas News, he also denied the incident to be communal.