The viral claim turned out to be false in the investigation of Vishvas News. No such objectionable statement has been made by Bollywood actress Priyanka Chopra. 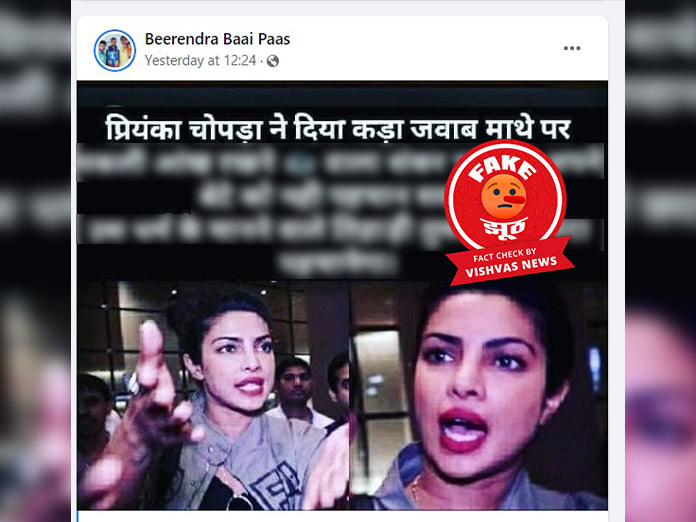 According to a report published by the Indian Express on March 1, 2022, she performed the Mahashivratri puja with her husband Nick Jonas on the occasion of Shivratri at her Los Angeles home. She often keeps puja in her house. He also shared its picture on his social media account. According to a report published by Hindustan Times on 6 October 2021, Priyanka Chopra had said in one of her interviews that I and Nick definitely worship before starting any big work. Nick loves worshiping me.

We did a Google reverse image search on the images used in the viral graphic. We found a YouTube video uploaded on a Bollywood-based channel Movie Talkies. This video was uploaded on June 9, 2016. According to the information given in the report, Priyanka Chopra was angry at the photojournalist at the airport.

For more information, Vishvas News reached out to Smita Srivastava, a senior Dainik Jagran journalist covering Bollywood in Mumbai. They told us that the viral claim is false. No such statement has been made by Priyanka Chopra.

This picture was shared by a Facebook user named Beerendra Baai Paas with the wrong claim. According to the profile, the user has 1610 followers. There are more than 4 thousand friends of the user on Facebook.

Conclusion: The viral claim turned out to be false in the investigation of Vishvas News. No such objectionable statement has been made by Bollywood actress Priyanka Chopra.