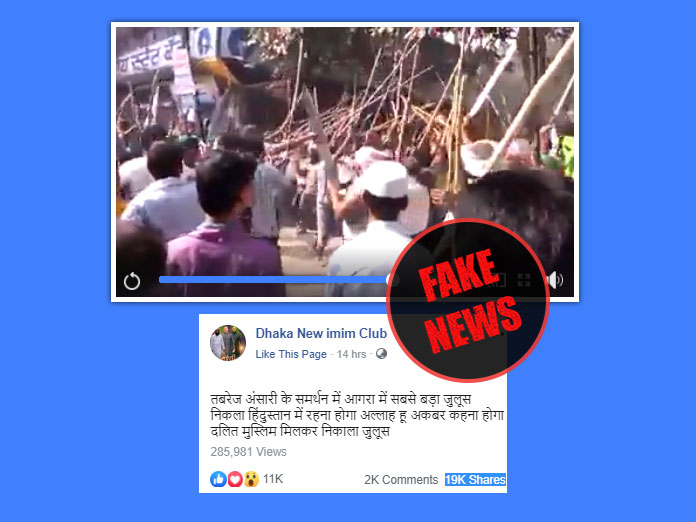 New Delhi| Vishvas Team|A video is going viral on social media in which a large number of people can be seen with swords. People in the video are showing aggression and chanting “you have to say Allah Hu Akbar if you want to stay in India” in Hindi. According to the description written with the video, this procession was held in Agra in support of Tabrez Ansari. In our investigation we found that this video was shot at Muharram event in Gopalganj in the year 2014, and not at the protest against Tabrez Ansari’s lynching.

A large number of people in the video can be seen with swords. The description is: “The biggest procession in Agra in support of Tabaraz Ansari, you have to say Allah Hu Akbar if you want to stay in India, Dalit Muslims come together for the procession.”

We looked at the viral video properly and checked its audio too. No one can be seen lip syncing the slogan that can be heard in the video. This viral video is 1 minute 48 seconds, in which there is a sound of slogans for 1 minute and 38 seconds and rest 10 seconds are blank.

To start your investigation, we read the comments of this video and found that a person wrote in the comment that this video was not of any protest but was shot at the time of Muharram in Gopalganj. We based our investigation on this comment and performed Google reverse image search. We searched with the words of ‘Gopalganj Muharram’ on YouTube and we found a video of 2014 with description “Gopalganj Muharram 2014.” In this video, only drum sound could be heard, no chanting. The video is otherwise similar to the viral video.

For more confirmation in this matter, we spoke to Agra SSP Babloo Kumar who told us that this video is not from Agra.

This video was shared by a page called Dhaka New imim Club on July 4, 2019, and this video has been shared 19000 times until this story is published. The page has 42,993 members.

Conclusion: In our investigation we found that this video was shot at Muharram event in Gopalganj in the year 2014, and not at the protest against Tabrez Ansari’s lynching.