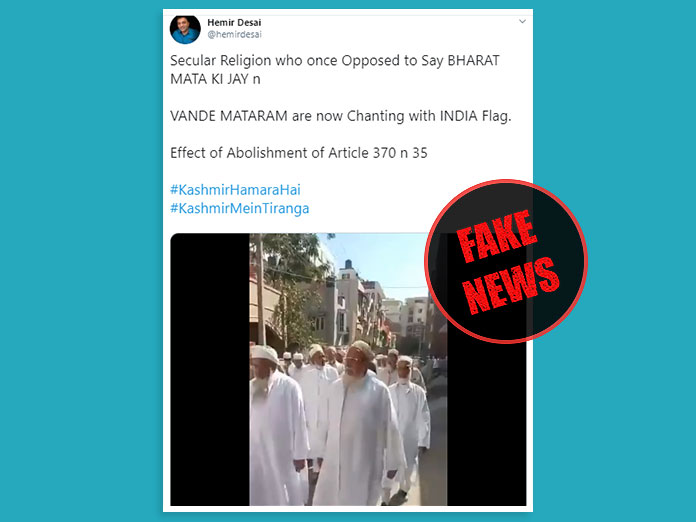 New Delhi (Vishvas Team).A video is going viral on social media showing some people from Muslim community taking out procession holding the Indian National Flag in their hands. They can be heard chanting Bharat Mata Ki Jai. The post is claiming that this procession was held after the removal of Section 370 from Jammu and Kashmir. In our investigation, we found that this video is not recent. This procession was held by people of Dawoodi Bohra community on 18 February 2019 when the people of Bohra community took out a rally in Bengaluru, Karnataka in honor of CRPF soldiers who were martyred in the Pulwama terror attack.

The viral post contains a 45-second video in which some people from Muslim community can be seen holding the national flag in their hands and taking out a rally while chanting Bharat Mata Ki Jai. The post claims “Secular religion that once opposed BHARAT MATA KI JAY n. Now chanting VANDE MATARAM with Indian flag. Effect of abolition of Article 370 and 35A. #KashmirHamaraHai #KashmirMeinTiranga”.

To start the investigation we used INVID tool and took out some key frames. We then searched these key frames on Google Reverse Image and found a video of 1 minute 52 seconds uploaded on a YouTube channel named Fayas fayas, titled “Bohra Muslims near Bannerghatta Road area in Bangalore took out procession in memory of martyred CRP”. This video was uploaded to YouTube on 26 February 2019. In this video, apart from the pro-India slogans, people can also be heard saying “martyred soldiers are immortal”.

Apart from this, we also found a tweet from a Twitter handle named Linda Newmai on Feb 19, 2019 which contained this video along with the description “Bohra Muslims near Bannerghatta Road area in Bangalore took out procession in memory of martyred CRPF jawans #IndianArmyOurPride #StandWithForces #IndiaWithMartyrs”

We then spoke to Murtaza Shatir, a leader of the Bohra community’s Delhi wing, who confirmed that “this video was shot when Bohra Muslims took out a rally near Bannerghatta Road area of ​​Bengaluru in memory of the CRPF jawans martyred in Pulwama in February 2019.”

Conclusion: In our investigation we found that this post is misleading; this video is from Bengaluru when the people of Bohra community took out a rally chanting slogans in support of the soldiers who were martyred in the Pulwama attack. This video is being spread wrongly in the name of Kashmir.