Fact Check: Pictures of school girl made DSP For One Day On Women’s Day Viral With Fake Claim﻿ 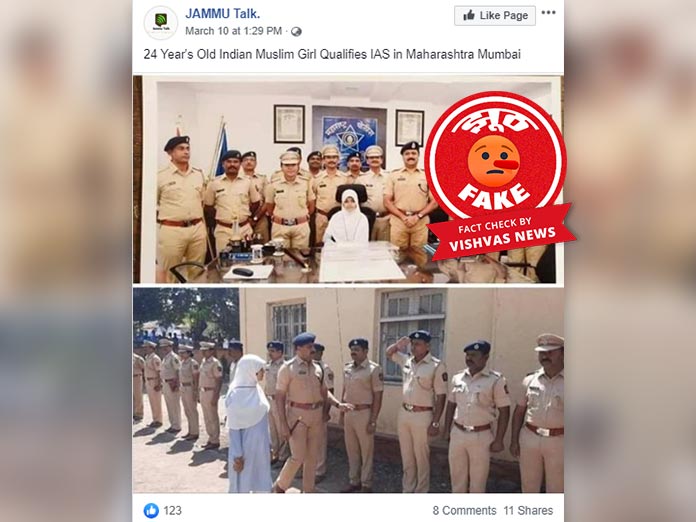 New Delhi (Vishvas News). Pictures of a girl in hijab are viral on social media with a claim that she has cleared IAS exam.  In the first picture, the girl is seated on a chair surrounded by policemen and in the second picture; we can see the policemen saluting the girl.

Vishvas News investigation revealed the claim to be false. The girl seen in the photographs is a 14-year-old schoolgirl who was made the District Superintendent of Police (DSP)for one day on the occasion of International Women’s Day in Buldhana district of Maharashtra. This girl is not an IAS officer.

A viral post on Facebook has two photos in which a girl can be seen with a policeman. While sharing this image, the user wrote “24 Year’s Old Indian Muslim Girl Qualifies IAS in Maharashtra Mumbai.” The archived version of the post can be accessed here .

To investigate this post, we first took a screenshot of the first picture and then searched it using Google reverse image search tool. We found a YouTube video in which the viral picture can be seen.

The video was   uploaded by The Times of India YouTube channel on 5 March 2020. The video titled, “Women’s Day: 14-year-old girl becomes DSP ‘for a day’ in Maharashtra’s Buldhana.” The video’s description states the girl, Sahrish Kanwal, Sahrish kanwal, from zilla Parishad Urdu High School, Malkapur tehsil, took over as DSP for a day.

We also found a news report published on the Times of India website in this context. According to the TOI article, “In a unique initiative to boost the confidence of girls and motivate them ahead of International Women’s Day (March 8), the Buldhana district administration gave an opportunity to bright girls of government schools to act as collector and superintendent of police for a day.”

We spoke to Buldhana SP Dilip Patil Bhujbal for more information in this subject.  “The girl seen in the picture is a student of Zilla Parishad Urud High School Malkapur Tehsil, who took over as DSP for a day. This girl was not an IPS officer,” Patil said. He clarified to us that this initiative gave the girls an opportunity to experience the functioning of the administration and address other issues. “The program was conducted in all the talukas of the district from 2 March to 8 March before the International Women’s Day. The girls of the Zilla Parishad and government schools were given an opportunity to experience different administrative positions for a day,” he added.

Social scanning of the Facebook Page Jammu Talk that shared the viral post revealed the page has 14,741 followers.

Conclusion: The viral post is fake. The girl seen in the photographs is a 14-year-old school student, who was made the DSP in Buldhana district, Maharashtra for a day on the occasion of International Women’s Day. This girl is not an IAS officer.