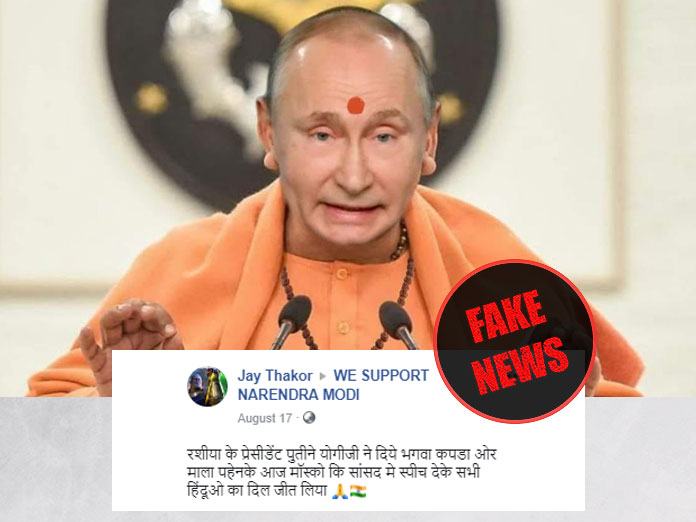 New Delhi (Team Vishvas). A picture is going viral on social media in which Russian President Vladimir Putin can be seen in saffron clothes and Rudraksha necklace. The post claimed that the Russian President addressed the Russian parliament in saffron clothes. In our investigation we found that this claim is false. With the help of editing tools, Vladimir Putin’s face has been superimposed on Yogi Adityanath’s picture.

In the viral post, Russian President Vladimir Putin can be seen wearing saffron clothes and Rudraksha necklace. The photo claims: “Putin, President of Russia, won the hearts of all Hindus by giving a speech in saffron cloths in Moscow Parliament today.”

We analyzed this picture properly for investigation. We noticed a stark difference of complexion between the face and the hands.

We took a screenshot of this picture and then searched it on Google reverse image. On the very first page, we saw a picture of Yogi Adityanath, which was identical to the viral picture except for the face.

We then spoke to SemiEktov Vladimir Igorevich, the press secretary of the Russian Embassy in India, who confirmed that the man in the viral photo isn’t Russian President.

The post said that Putin spoke in the Russian Parliament while wearing these saffron clothes. When we checked, we found out that the upper house of Russia is called Federal Assembly, not the Parliament.

We found many of Putin’s previous Federal Assembly addresses in this regard, but we did not find any video where Putin wore saffron costumes.

This post was shared by a Facebook user named Jay Thakor on the Facebook page named WE SUPPORT NARENDRA MODI. This page has a total of 2,930,660 members.

Conclusion: In our investigation we found that this claim is false. With the help of editing tools, Vladimir Putin’s face has been superimposed on Yogi Adityanath’s picture.