Subhas Chandra Bose was not clicked along with Gajanan Maharaj, the viral photo consists of Col Nizamuddin and Shankaracharya of Puri. 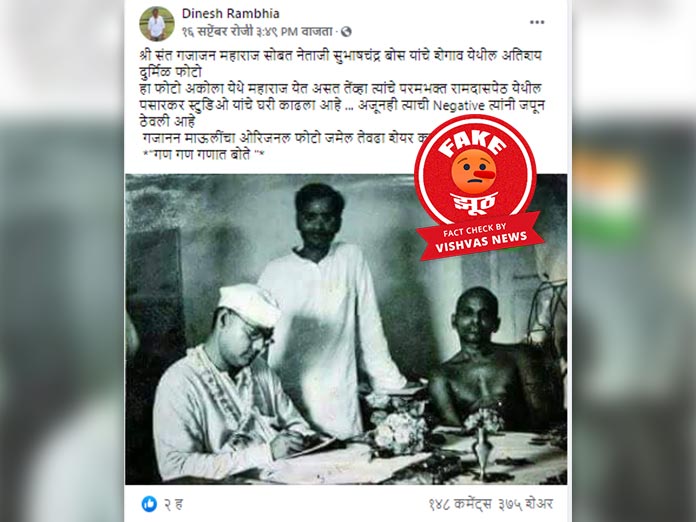 Claim:
Facebook user Dinesh Rambhia posted a photo of Subhas Chandra Bose on 16 September in a group, ‘Aathavanitli Marathi Gaani’ and claimed that this was a rare photo of Sri Sant Gajanan Maharaj and Netaji Subhas Chandra Bose. It is also being claimed that since Gajanan Maharaj used to visit Akola, it was clicked by a devotee in Ramdaspeth, Akola at his studio. The negative of the photo is still preserved.

We found this photo posted on the Twitter handle #IndianHistory @RareHistorical posted on April 5, 2016. ‘Netaji Subhas Chandra Bose with Shankaracharya of Puri-Orissa‘ the post said.

We also found the image being shared on the verified Twitter handle of Congress.

According to the website, betterphotography.in the photo was clicked by Manoranjan Ghosh.

It was now clear that the other two people along with Subhas Chandra Bose in the picture are, Shankaracharya of Puri and Col Nizamuddin.

Vishvas News then did a social background check of the user who shared the image. Dinesh Rambhia is a resident of Mumbai and the group ‘आठवणीतली मराठी गाणी’ has over 3.3 lakh members.

Conclusion: Subhas Chandra Bose was not clicked along with Gajanan Maharaj, the viral photo consists of Col Nizamuddin and Shankaracharya of Puri.