Fact Check: These religious books were not found in Bihar gutter; Old picture from Saudi Arabia is getting viral with wrong context 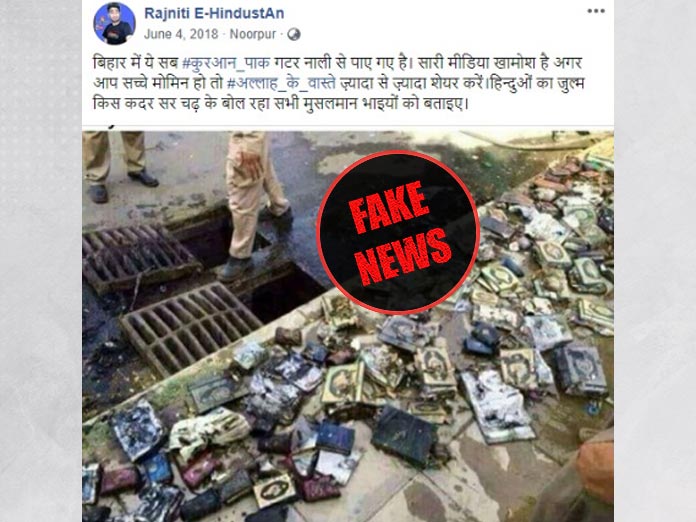 In the viral picture, some religious books can be seen lying near a drain. The viral post claims “all of these religious books #Kuran_Pak have been found in a gutter drain in Bihar. The media is silent. If you are a true Muslim, please share.”

To fact-check this post, we did a reverse image search of this picture. In our investigation, we found a news story of riyadhconnect.com in which this picture was used. According to the news published on December 14, 2013, this incident happened in Taif area of ​​Saudi Arabia where these religious books were excavated from a drain near a mosque.

We also found this news on a YouTube channel from Saudi Arabia with the same claim.

For more confirmation, we spoke to Muhammed Al Hazari, the media and communication in-charge of the Taip Police, who told us that the incident occurred in 2013 when these books were found in a drain in Al Salama district. This matter is still prejudice.

In this connection, we spoke to the Chief Executive Officer of Bihar Sunni Waqf Board, Dr. M A Ajazi, who said that some people spread such false rumors to harm communal harmony. Such fake news should be strongly condemned.

This post was shared by a Facebook page named ‘Khujli To Hogi Hi’. This page has a total of 844,046 followers.

Conclusion: We found in our investigation that this claim is false. Actually this incident happened in 2013 when these religious books were found in a drain in Taif area of ​​Saudi Arabia.